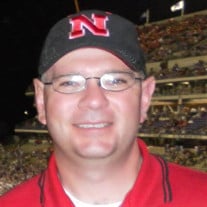 Aaron M. Cavanaugh, 41, of Minden, passed away on Saturday, February 15, 2020 in Kearney. Funeral services will be held at 10:30 a.m. on Friday, February 21, 2020 at the Craig Funeral Home in Minden with the Rev. Marcia Dorn officiating. Military honors will be presented by the Minden American Legion, Heartwell Veterans of Foreign Wars, and North Platte Funeral Honors team in conjunction with the United States Army Military Honors Team. Interment will be held following services at 2:00 p.m. at Ft. McPherson National Cemetery near Maxwell, NE. In honor of Aaron, casual Husker attire is requested. There will be no visitation and the casket will be closed. Memorials in Aaron’s honor are kindly suggested to the family for later designation. Craig Funeral Home is in charge of the arrangements. Aaron Mark Cavanaugh was born on September 1, 1978 at McGuire Air Force Base in Wrightstown, New Jersey to the late Mark T. Cavanaugh. He grew up on the McGuire AFB and Altus, OK AFB locations, graduating from Altus High School with the class of 1997. Following graduation, he honorably served his country with the United States Army from 1998 until 2014. During Aaron’s military tenure, he was the recipient of the Iraq Campaign Medal, Joint Service Achievement Medal, Good Conduct Medal, Defense Service Medal, NCO Professional Development Ribbon, and completed leadership development and administrative courses while serving as an Information Technologies Specialist. Aaron was a life member of the Heartwell V.F.W. Post #5537 and had various hobbies including: studying the weather, planning road trips, hunting, spending time with friends and family, following the Broncos and he was an avid Husker fan. Affectionately known as “Winger”, Aaron was the most caring person, with a heart of gold. Those left to cherish his memory include his sister, Mandy (Les) Richards of Oklahoma City, OK; nephew, Jackson Richards; aunts and uncles, Michael (Janet) Cavanaugh, Matthew Cavanaugh, Debra (Dan) Dorn, and David (Donna) Cavanaugh, all of Minden, NE; as well as a host of cousins, extended relatives and numerous friends. Aaron was preceded in death by his father Mark Cavanaugh; grandparents, Larry and Delores Cavanaugh, and Hans and Wanda Prien. Tributes and memories can be shared with the family www.craigfunerals.com.

Aaron M. Cavanaugh, 41, of Minden, passed away on Saturday, February 15, 2020 in Kearney. Funeral services will be held at 10:30 a.m. on Friday, February 21, 2020 at the Craig Funeral Home in Minden with the Rev. Marcia Dorn officiating.... View Obituary & Service Information

The family of Aaron M. Cavanaugh created this Life Tributes page to make it easy to share your memories.

Aaron M. Cavanaugh, 41, of Minden, passed away on Saturday, February...