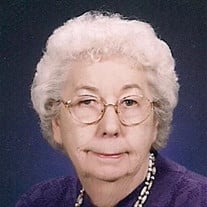 Adella Wilken, 89 years of age of Hildreth, NE died suddenly and was found in her, home, Tuesday, May 2nd, 2017. Celebration of life services will be Thursday, May 11, 2017, at the Trinity Lutheran Church in Hildreth, NE at 2 p.m. with Revs. Steve and Patti Byrne officiating. Burial will be in the Hildreth Cemetery. There will be no visitation. Jelden-Craig Funeral Home is in charge of arrangements. Adella was born April 9, 1928, to Herman and Grace DeJonge Wilken on a farm where her father was born. She was baptized Adelia Mae Wilken on April 29,1928, at the family home near Emmanuel Lutheran church of rural Hildreth. Adella attended a one room school a mile south of her home. After completing the eighth grade, she went on to graduate from Hildreth High School with the class of 1946. Adella attended Kearney State College for one summer and then taught in rural District 63 school for two years. After attending college one full year and many summer sessions, Adella graduated from Kearney State College in 1956. In the mean time she taught in elementary schools in Lexington and Imperial, Nebraska. She taught one year at a Christian Day School in Sherman Oaks, California. In 1956, Adella went to Ft. Morgan, Colorado, to teach. During her twenty-seven years of employment at the public schools, she was granted a two-year leave of absence (1964- 1966) to teach in the American Lutheran Mission Field in Papua, New Guinea. During her stay at Ft. Morgan, Colorado, Adella attended Colorado State College at Greeley and received a Master’s degree in educational psychology. Adella took early retirement in 1983 and returned to Hildreth where she did some substitute teaching. She cared for her parents in their waning years. Adella moved from her house on Hubbard St. to the house where her parents lived on Sheppard St. She was a member of Trinity Lutheran Church where she participated in the Bible study group and the quilting groups. Adella enjoyed visits from family and always had a book that she was reading. She was a faithful servant of our Lord and loved her church. She is survived by her brothers, Roy of Upland, Nebraska; Don and wife Carol of Johnson Lake, Nebraska; sister Karen and husband Winston of Bennington, Nebraska; four nephews and one niece, Robert and wife George-Ann Wilken of Clay Center, Kansas; Mark Wilken of Johnson Lake, Nebraska; Todd and wife Julie Anderson of Omaha, Nebraska; Timothy and wife Tammy Anderson of Omaha, Nebraska; and Deborah Wilken of Golden, Colorado; five great nephews, five great nieces, five great-great nieces and nephews and many cousins and friends. Adella was preceded in death by her parents and twin great nieces, aunts and uncles.

Adella Wilken, 89 years of age of Hildreth, NE died suddenly and was found in her, home, Tuesday, May 2nd, 2017. Celebration of life services will be Thursday, May 11, 2017, at the Trinity Lutheran Church in Hildreth, NE at 2 p.m. with Revs.... View Obituary & Service Information

The family of Adella Mae Wilken created this Life Tributes page to make it easy to share your memories.

Send flowers to the Wilken family.