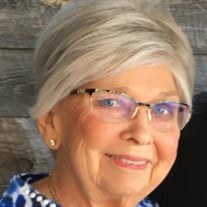 Adrianne “Dolly” Grams, 84, of Minden, passed away peacefully at home surrounded by her family on Monday, February 28, 2022. Funeral services will be held at 10:30 a.m. on Saturday, March 5, 2022 at the Minden United Methodist Church with Rev. Peter Choi officiating. The service will be live streamed to the church’s Facebook and YouTube pages. Interment will be held later that day at 2:30 p.m. at the Upland Cemetery. Visitation will be held from 5:00 to 7:00 p.m. on Friday, March 4, 2022 at the Craig Funeral Home in Minden. In lieu of flowers, memorials are suggested to the Minden Opera House or the Minden Chamber of Commerce Beautification Committee. Craig Funeral Home in Minden is in charge of the arrangements. Dolly was born on July 12, 1937, in Upland, Nebraska at her grandmother’s home to Bernard and Milrae (Christiansen) Bertrand. She was the oldest of 7 children, grew up in Upland, and graduated from Upland High School in 1954. She attended Nebraska State Teachers College at Kearney. On May 20, 1956 she married Orlan Grams in Upland, Nebraska. The family made their home in and around Upland, where she was a supportive farm-wife and mother. They were blessed with six children, Karen, Dave, Dan, Craig, Shelly, and Joel. They made their home at Upland until 1993 when they moved into Minden. Dolly is remembered as being very modest, loving, reserved, supportive, and patient. She showed her constant reassurance by stating, “It’ll be okay." She enjoyed gardening, a skill she learned from her grandmother and her aunt. She also enjoyed reading, playing bridge, dancing with her favorite dance partner, Orlan; volunteering for the Minden Opera House, needlework, shopping, travel, cooking, decorating, spending time with her friends from P.E.O., Bridge Club, Extension Club, Garden Club, and Horticulture Club. In 2019 she captained the winning team for the “Oh Gee Open” family pasture golf tournament. Above all, she enjoyed family gatherings and time with her children and grandchildren. Dolly leaves many family members to celebrate her life and appreciate all the love she generously gave. Those include her husband of 65 years, Orlan, her children, grandchildren, and great-grandchildren, Karen Smith and her children and grandchild, Lauren Smith, Katie (Joe) Bedard, and their daughter, Blaise; David (fiance Kim Johnson) and their children and grandchild, Sydney (Jordan) Granger and their daughter, Banks, Spencer Shadley, Alexandra (Cody) Trent, Riley Johnson, and Natalie Johnson; Dan (Amber) and their children and grandchild, Courtney (Ryan) Fagan, Riley and son, Cooper, Taylor, and Cole, Ashley (Ivan) Anderson, Christy (Jamie) Reiman; Craig (Renee) and their children and grandchild, Ben (Lyndsie), Nic (Casey), their daughter, Chesney, Chris (Brielle), and Elizabeth (Zach Peterson); Shelly (Jon) Whittaker and their children and grandchild, Blake (Katie), Logan (Sara) and their daughter, Mya, and daughter Olivia Whittaker; and Joel (Laura) and their children and grandchildren, Lindsay (Alex) Lowe, Zachary (Ellen), Spencer (Brittany) Meyer and their children, Mazikeen and Remington, and Logan Meyer; brothers, Leon Bertrand and Gale “Diddly” Bertrand; sister Cindy (Ron) Schneider, sisters-in-law, Meizie Rademacher and Norma Kroese; along with many neices, nephews, cousins, extended relatives and friends. She was preceded in death by her parents; parents-in-law; brothers Glenn, Jim, and infant brother Wayne; son-in-law William Smith; grandsons Drew Meyer and Brandon Grams; along with several brothers-and sisters-in-law. Those who preceded Dolly in death include her parents, parents-in-law, brothers Glenn, Jim, infant brother Wayne, son-in-law William Smith, grandsons Drew Meyer and Brandon Grams, along with several brothers- and sisters-in-law. Tributes and memories can be shared with the family at www.craigfunerals.com.

The family of Adrianne "Dolly" Grams created this Life Tributes page to make it easy to share your memories.