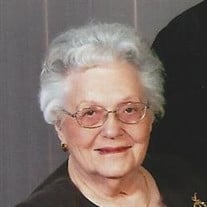 Alice J. Driscoll, 92 years of age from Kearney, Nebraska, formerly of Axtell passed away on Sunday, March 27, 2016 at the Good Samaritan Hospital in Kearney. Memorial services will be on Friday, April 1, 2016 at 4:00 p.m. at the First Presbyterian Church in Axtell with Rev. Steve Deines officiating. Burial will be in the Pleasant Hill Cemetery in Axtell prior to the memorial service. Visitation will be at the Layton-Craig Funeral Home in Minden on Thursday from 4-6 p.m. Memorials are suggested to the First Presbyterian Church in Axtell or the Nebraska Commission for the Blind. Alice was born on December 7, 1923 on a ranch northeast of McCook, NE to George and Theda (Poore) Carter. She grew up on the family ranch and attended country school. Alice completed high school at Red Willow and graduated in 1941. She received her teaching certificate from Kearney State Teachers College in 1945. On August 3, 1947 she married Lloyd M. Driscoll at the First Congregational Church in McCook. Lloyd and Alice lived and farmed northwest of Axtell. To this union three children were born, Susan, Rachael and Jeff. Alice’s special joy was her family. She loved to sew, cook for her family, friends and community. She was a member of the First Presbyterian Church in Axtell and had served as an ordained elder of the church. She was a member of the Presbyterian Women, Morning Circle, Farmerette Extension Club, Tuesday Bowling and many card clubs. Survivors include two daughters, Susan Mayer and husband, Jim of Omaha and Rachael Phillips and husband, Allen of Axtell; son, Jeff Driscoll and wife, Bev of Kearney; nine grandchildren, Greg Mayer, Allison Brewer and husband, Scott, Laura Mayer, Brian Phillips and wife, Brandi, Andrew Phillips and wife, Jamie, Sam Phillips, Betsy Sorensen and husband, Wes, John Driscoll and fiancée, Helia and Kelsey Driscoll; and ten great grandchildren. Alice is preceded in death by her husband, Lloyd, sister Ruth Ella and brothers, Robert and Theo.

Alice J. Driscoll, 92 years of age from Kearney, Nebraska, formerly of Axtell passed away on Sunday, March 27, 2016 at the Good Samaritan Hospital in Kearney. Memorial services will be on Friday, April 1, 2016 at 4:00 p.m. at the First Presbyterian... View Obituary & Service Information

The family of Alice J. Driscoll created this Life Tributes page to make it easy to share your memories.

Send flowers to the Driscoll family.