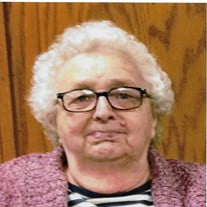 Arlyce Jean Albers, 86 years of age from Hildreth passed away on Sunday, March 19, 2017 at the Kearney County Health Services-Hospital in Minden.  Funeral services will be on Saturday, March 25, 2017 at 11:00 a.m. at the Trinity Lutheran Church in Hildreth with Reverends Patti and Steve Byrne officiating.  Burial will be in the Emmanuel Lutheran Cemetery.  Visitation will be at the Jelden-Craig Funeral Home in Hildreth on Friday from 4-6 p.m.   Arlyce was born on November 22, 1930 on a farm three miles south of Hildreth to Onno and Hilka (Casper) Jurgens.  She was one of six children.  Arlyce was baptized as an infant and confirmed into the Lutheran faith on March 25, 1945.  As Pastor Patti noted, Arlyce will be buried on the same day that she was confirmed into the Lutheran faith.   Arlyce married Alfred Albers after he returned from the U.S. Army post World War II.  Arlyce always would say “I’m a stubborn German" and the family could all (with smiles) attest to that.  And, one didn’t want to get between Arlyce and a pitch table without battle gear on!   Survivors include daughter, Candy Johnson and her husband, Elwood of Seward and their children, Milissa Wiles and her husband, Paul,; J.D. (Joshua) Johnson, Danielle Heider and her husband, Mark and John Johnson; daughter, Laurel Brouillette of McCool, NE and her children, Jason, Justin, Jake and his wife Libby, Amber, Cody and Stacey; and Jason Ozmun;  and son, Rodney Albers of Hildreth; great grandchildren, Katie, Everett, Leah, Elliott, Mae, Maxon, Lux and Declan; and sisters in-law Val Jean Jurgens, and Sharon Jurgens; who are the families treasured last surviving members of the Onno Jurgens family wives of Harold Jurgens  and Kay Jurgens.   Arlyce is preceded in death by her husband, Alfred, sisters, Evelyn Ortgiesen and Donna Albers; and brothers, Virgil Jurgens, Harold Jurgens and Kay Jurgens.

Arlyce Jean Albers, 86 years of age from Hildreth passed away on Sunday, March 19, 2017 at the Kearney County Health Services-Hospital in Minden.  Funeral services will be on Saturday, March 25, 2017 at 11:00 a.m. at the Trinity Lutheran Church... View Obituary & Service Information

The family of Arlyce Jean Albers created this Life Tributes page to make it easy to share your memories.

Arlyce Jean Albers, 86 years of age from Hildreth passed away...

Send flowers to the Albers family.