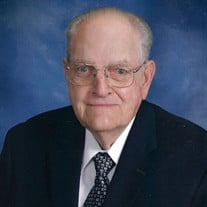 Arnold G. Quadhamer, 92, of Hildreth, passed away Sunday, November 24, 2019 at CHI Health – Good Samaritan Hospital in Kearney. Funeral services will be held at 11:00 a.m. on Friday, November 29, 2019 at Trinity Lutheran Church in Hildreth with the Rev. Marcia Dorn officiating. Interment will be held following services at the Emmanuel Lutheran Cemetery south of Hildreth. Visitation will be held one hour before service time at the church. Memorials in Arnold’s honor are kindly suggested to the Hildreth Volunteer Fire Department or to Trinity Lutheran Church in Hildreth. Craig Funeral Home is in charge of arrangements. Arnold was born on March 2, 1927 in rural Franklin County to Gerhard and Lena (Albers) Quadhamer. He grew up in the Hildreth area and graduated from Hildreth High School with the class of 1944. He was united in marriage to Florence (Hemje) on December 26, 1978 in Hildreth. The family made their home in Hildreth, where Arnold farmed for many years. Arnold was a member of Emmanuel Lutheran Church, which later became Trinity Lutheran Church in Hildreth, where he served on the church council for many years. He also enjoyed bowling, watching horse races and NASCAR, traveling, square dancing and attending his grandchildren’s activities. Arnold was also an avid collector of coins, model cars and other memorabilia. Those left to cherish his memory include his wife, Florence of Hildreth; sister, Vernetta Fritz of Minden; brother, Roger Quadhamer of San Pedro, CA; step-son, Bob (Brenda) Hemje of Grand Island; nieces and nephews, Jerome (Cindy) Fritz of Hildreth, Naomi (Rick) Bennett of Fairbury, NE, Calvin (Linda) Fritz of Hildreth, Douglas (Tammy) Fritz of Hildreth, Marianne (Jim) Fritz-Halsted of Kearney, Colleen (Kevin) Benson of Hildreth; grandchildren, Kari (Troy) Legg, Jeff (Amy) Hemje and Kyle (Stephanie) Hemje; 11 great-grandchildren; as well as a host of extended relatives and friends. He was preceded in death by his parents; step-son, Steve Hemje; grandchildren Casey and Jill Hemje; great-niece, Celeste Fritz; and great-nephew, Joshua Benson. Tributes of memory can be shared with the family at www.craigfunerals.com.

The family of Arnold G Quadhamer created this Life Tributes page to make it easy to share your memories.

Send flowers to the Quadhamer family.