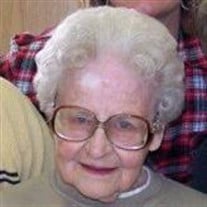 Avis Cope, 98 years of age from Minden, NE died on Sunday, October 23, 2016 at the Bethany Home in Minden. Celebration of Life Services will be on Wednesday, November 2, 2016 at 2:00 p.m. at the St. Paul Lutheran Church in Minden with Reverend Christopher Hazzard officiating. Burial will be in the Minden Cemetery. Craig Funeral Home in Minden is in charge of arrangements. Avis was born on December 6, 1917 in Campbell, NE to Lewis and Lottie (Harris) Reichstein. She grew up in Minden and graduated from Minden High School in 1936. On November 16, 1936 she married Wesley Cope and they lived in Minden until moving to Kearney in 1943. They owned and operated Cope Neon for 40 years. Avis also worked at Ruters Clothing, Young Modern and Horizon design all in Kearney. They enjoyed their time at their cabin on Midway Lake near Cozad. Wesley died in 1967 and Avis later moved to Minden. Avis enjoyed her “Coffee Club”, watching horse racing on TV, especially the Kentucky Derby, she was always decorating her house for the Holiday’s, one of her favorites was Halloween, she was an animal lover and a historian. Avis loved her family and family gatherings were very important to her. She was a great cook and her hospitality was unbelievable. Avis was meticulous about everything, especially her yard. She will be greatly missed. Survivors include two sons, Robert Cope of Alma and Marshall Cope of Minden, daughter in-law, Candy Cope of Frederick, CO; 13 grandchildren and her spouses, Julie and Ron Terrel of Minden, Marshall and Linda Cope of Kearney, Robert and Tammy Cope of Martell, NE, Kyla and Ben Jezbera of Kearney, Christine Canady of Denver, Jody and Dale Moe of Frederick, CO, Corey and Marvina Cope of Thornton, CO, Todd and Mary Cope of Arlington, TX, Troy and Lisa Cope of Omaha, Taryn and Chris Brisbin of Kearney, Honey Cope of Kearney, Melanie and Jim Behrens of Lincoln and Matt and LaDonna Jackman of Woodriver; 20 great grandchildren and 16 great-great grandchildren. She is preceded in death by her husband, Wes, son, Monte, brother Uhlan Reichstein and his wife, Alice, sister Doris Youngson and her husband, Calvin, nephew, Lynn Youngson.

Avis Cope, 98 years of age from Minden, NE died on Sunday, October 23, 2016 at the Bethany Home in Minden. Celebration of Life Services will be on Wednesday, November 2, 2016 at 2:00 p.m. at the St. Paul Lutheran Church in Minden with Reverend... View Obituary & Service Information

The family of Avis L. Cope created this Life Tributes page to make it easy to share your memories.

Send flowers to the Cope family.