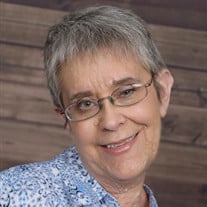 Barbara A. Hansen, 68, of Minden, passed away on Saturday, December 11, 2021 in Strasburg, CO. Celebration of life services will be held at 11:00 a.m. on Thursday, January 13, 2022 at Bethany Lutheran Church in Minden with the Rev. Donald Hunzeker and PMA Julie Schmidt officiating. The service will be live-streamed to the funeral home's Facebook page. There will be no visitation. Private family interment will be held at a later date at the Keene Cemetery. Memorials in Barb’s honor are kindly suggested to Bethany Lutheran Church in Minden. Craig Funeral Home is in charge of the arrangements. Barbara A. Hansen was born on June 12, 1953 in Columbus, NE to Joseph and Bernice (Kreizinger) Zwiener. She grew up in the Columbus area and graduated from Columbus High School with the class of 1971. She continued her education at Central Community College in Grand Island. She lived in Grand Island many years where she was employed at various places. She later moved back to Columbus, where she met Ronald S. Hansen, while taking law enforcement classes. They were married on May 2, 1981 in Columbus. Having Neurofibromatosis all of her life, she had a malignant tumor and lost her left arm and shoulder in July of 1982. This brought many challenges, but it never slowed her down. If anyone told her she couldn’t do anything, she loved to prove them wrong! Many people fondly called her the “One-Armed Bandit”. One of her greatest accomplishments was walking the Portland Marathon in 2000; she finished in 8 hours and 10 minutes. Although she had no children of her own, the most enjoyable times of her life included caring for and being around young people. She enjoyed watching them grow and many of them lovingly called her “Grandma Barb”. In 1982, she joined Bethany Lutheran Church in Minden and was active in many activities. She participated in many community Bible studies and women’s retreats. Barb truly was an inspiration to countless people. Those left to cherish her memory include her husband, Ron Hansen of Minden; brothers, Joe Zwiener of Denver, CO, and Michael (Mary) Zwiener of St. Louis, MO; sister, Mary (Edwin) Koesh of Columbus, NE; sister and brother-in-law, Joyce (Greg) Rundel of Mexico, NY; as well as a host of nieces, nephews, extended relatives and close friends. She was preceded in death by her parents, and sister-in-law, Marilyn Zwiener. Tributes and memories can be shared with the family at www.craigfunerals.com.

Barbara A. Hansen, 68, of Minden, passed away on Saturday, December 11, 2021 in Strasburg, CO. Celebration of life services will be held at 11:00 a.m. on Thursday, January 13, 2022 at Bethany Lutheran Church in Minden with the Rev. Donald... View Obituary & Service Information

The family of Barbara A. Hansen created this Life Tributes page to make it easy to share your memories.

Barbara A. Hansen, 68, of Minden, passed away on Saturday, December...

Send flowers to the Hansen family.