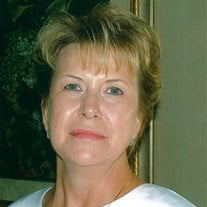 Barbara J. Morrison, 75, of Minden, passed away on Sunday, February 16, 2020 at Bethany Home in Minden. She was comforted by her son, Kevin who was with her when she passed. Celebration of life services will be held at 11:00 a.m. on Saturday, March 7, 2020 at the Minden Evangelical Free Church with the Rev. Tom Barnes officiating. Private family inurnment will be held following services at the Paxton Cemetery. There will be no visitation as the family has honored Barb’s wish to be cremated. Memorials in Barb’s honor are kindly suggested to the family for later designation. Craig Funeral Home is in charge of the arrangements. Barbara Jane Morrison was born on February 26, 1944 in Sutherland, Nebraska to Rex E. and Eileen E. (Nelson) Dickerson. She grew up in the Sutherland area and graduated with the Sutherland High School class of 1962. She furthered her education at the Automation Institute in Omaha and then worked for Mutual of Omaha until moving to Denver in 1973. In Denver, she completed coursework to become a legal secretary. Barb worked in the legal field for over 21 years before retiring in 2000. She moved to Minden in 2008. Barb was a member of the Minden Evangelical Free Church and several coffee groups in town. Her hobbies included dancing, going to movies, reading, and spending time with friends and family. Those left to cherish her memory include her son, Kevin L. Orosco and wife Lauren of New Castle, CO; two grandchildren, Brian J. Orosco of Thornton, CO and Daniel J. Orosco and wife Brenna of Oceanside, CA; sister, Norma Schrack and husband Keith, of Ogallala, NE; niece, Stef Schrack and fiancé Andy Cole of Ogallala, NE; nephew, Cory Schrack and wife Robin of Gardner, KS; as well as a host of extended relatives and friends. She was preceded in death by her parents and her step-father, Johnnie L. Morrison. Tributes and memories can be shared with the family at www.craigfunerals.com.

Barbara J. Morrison, 75, of Minden, passed away on Sunday, February 16, 2020 at Bethany Home in Minden. She was comforted by her son, Kevin who was with her when she passed. Celebration of life services will be held at 11:00 a.m. on Saturday,... View Obituary & Service Information

The family of Barbara J. Morrison created this Life Tributes page to make it easy to share your memories.

Barbara J. Morrison, 75, of Minden, passed away on Sunday, February...

Send flowers to the Morrison family.