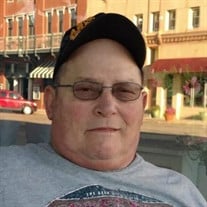 Bernard W. “Bernie” Curry, 72, of Minden, passed away on Sunday, December 2, 2018 at Kearney County Health Services in Minden. Memorial services will be held at a later date. There will be no visitation as the family has honored Bernie’s wish to be cremated. Memorials in Bernie’s honor are kindly suggested to the family for later designation. Craig Funeral Home is in charge of the arrangements. Bernard Wilson Curry was born on March 4, 1946 in Columbus, Nebraska to Andrew F. and Pauline J. (Cuba) Curry. He graduated from Kearney High School with the class of 1964. After graduation, he honorably served his country with the United States Army. He later continued his education at Kearney State College. After college, he was employed as a police officer in Dallas, TX, later moving to Holdrege where he served as a police officer for several years. In 1978, he met and married Twila Dierking Lemburg in Holdrege. The family made their home in Heartwell before moving to Minden when Bernie began work with the Eaton Corporation in Kearney. After 25 years with Eaton’s, Bernie retired and at present was employed with ABM Janitorial at Becton-Dickinson in Holdrege. His hobbies included hunting, fishing, camping, gardening and spending time with his dog, Dixie Mae. Bernie especially enjoyed spending time with his family, watching old movies and spoiling his grandchildren and great-grandchildren. Those left to cherish his memory include his wife Twila of Minden; son, Brad Curry and wife Megan of Farmington, MO; daughters, Gayla Curry and Shelly Hamm and husband Randy, all of Dallas, TX; step-sons, Mike Lemburg and wife Emalee of McCook, NE and Keith Lemburg and wife Trina, of Grand Island, NE; 10 grandchildren; 5 great-grandchildren; brother, Andy Curry and wife Kathy of Houston, TX; sister, Judy Cashman and husband Wayne of Indian Town, FL; as well as a host of nieces, nephews, other relatives and friends. Bernie was preceded in death by his parents, grandparents and one brother, Bob. Tributes of memory can be shared with the family at www.craigfunerals.com.

Bernard W. &#8220;Bernie&#8221; Curry, 72, of Minden, passed away on Sunday, December 2, 2018 at Kearney County Health Services in Minden. Memorial services will be held at a later date. There will be no visitation as the family has honored... View Obituary & Service Information

The family of Bernard W. Curry created this Life Tributes page to make it easy to share your memories.

Send flowers to the Curry family.