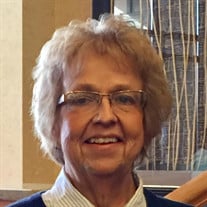 Beth M. Petersen, 58 Axtell Resident Beth Marie Petersen, 58, of Axtell passed away on Wednesday, September 13, 2017 at CHI Health Good Samaritan Hospital in Kearney, surrounded by her family. Services will be held at 3:00 p.m. on Monday, September 18, 2017 at the First Baptist Church in Kearney with the Rev. Stan Murdoch officiating. Private family burial will be held prior to services at the White Hill Cemetery near Minden, NE. There will be no public visitation. Craig Funeral Home in Minden is in charge of the arrangements. Beth was born on January 24, 1959, in Loup City, NE to Leland and Betty Bauhard. She grew up on a farm outside of Arcadia, NE where she enjoyed working on the family farm, riding her horse Jessica, and playing her trumpet, which kindled her passion for music. She then graduated from Loup City High School in 1978 and attended Kearney State College where she graduated with a bachelor’s degree in Music Education. She began student teaching and working for Bethpage Mission in Axtell, where she met her future husband Doug Petersen, through a mutual friend Larry Bonet. Before she finished student teaching, she was hired as the Instrumental Music Teacher and worked beside J. Rodney Wendell for the next ten years developing an outstanding music program. Doug and Beth were married on August 15, 1987. Together, they opened Doug’s Shop and later had three children; Mitch, Emalie, and Ellie. Beth also had an adopted son, Marshall Bennet who lived at Mosaic in Axtell. He has spent many holidays and weekends at Beth’s house, and she was always sure to make him feel welcome. After teaching for ten years, Beth took a break in order to homeschool her children from Kindergarten through 12th grade. She spent numerous hours and days preparing and teaching, in order to provide for them a good education. In addition to homeschooling, she taught private piano and instrumental lessons. She was the Learning Center Manager for Central Community College where she assisted people with their GED classes and college education. She enjoyed her weekends and free time; camping, reading, watching her kids race motocross, sitting on the deck, playing with her dogs, going for drives in the country, riding four-wheelers, and spending time with her family and friends. After her children graduated, she returned to Axtell Community School and education, where her passion truly was, teaching music. She spent the next nine years with hundreds of students, whom she loved. She and her students won many awards, such as; marching band competitions, concert band competitions, Nebraska Music Educator of the Year, NTV Teacher of the Month, and Citizen of the Year in Axtell. She not only taught music, but life lessons and how to be a friend. She truly loved life and lived it to the fullest through all of her days. Her faith was unwavering, and she was an active member of First Baptist Church in Kearney. Not only did she leave a legacy in music, but in the hearts of all who knew her. She was preceded in death by her parents, Leland and Betty, and sister, Dixie. She is survived by her husband, Doug; son, Mitch; daughters, Emalie and Ellie; son, Marshall; sister Barbara Macura and husband Paul of Gardnerville, NV; niece Erin and Husband Jeremy Defruiter and sons, and many other family members. A memorial fund has been established in Beth’s memory at Farmer’s and Merchant’s Bank in Axtell for later designation by her family.

The family of Beth Marie Petersen created this Life Tributes page to make it easy to share your memories.