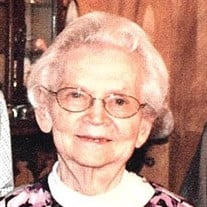 Betty Lou (Berger) Beck, 90, of Kearney, formerly of Minden, passed away on Saturday, March 30, 2019 at Mt. Carmel Home in Kearney. Funeral services will be held at 10:00 a.m. on Friday, April 5, 2019 at the First Christian Church in Minden with the Rev. Jim Gordon officiating. Interment will be held following services at the Minden Cemetery. Visitation will be held from 4:00 to 6:00 p.m. on Thursday, April 4, 2018 at the Craig Funeral Home in Minden. Memorials in Betty’s honor are kindly suggested to the First Christian Church in Minden. Craig Funeral Home is in charge of the arrangements. Betty was born on March 13, 1929 on the family farm, north of Minden, to Lynn and Myrtle (Schmidt) Berger. She attended country school at District 25 School and graduated with the Minden High School class of 1946. Through mutual friends she met and was courted by a special young farmer named Richard Beck. On August 30, 1947, she was united in marriage to Richard R. Beck in Colorado Springs, CO and to this union, three sons were born: Robert L., Gary R. and John S. Beck. The family made their home east of Minden. Betty flourished in the role of wife, mother and life manager; pitching in wherever necessary to support the farming operations as well as managing the family household. In 1984, they purchased their forever home and moved into “town”. Betty was a member of the First Christian Church in Minden. She enjoyed square dancing, playing card games, especially Some-R-Set, quilting, cross-stitch, crossword puzzles and ceramics. She especially loved to cook and bake, since that meant the family would gather together around her table. Time was most treasured being surrounded by her family and attending her children and grandchildren’s games and other activities. Betty also kept a daily diary for over 40 years in which she recorded all of life’s events. Those left to cherish her memory include her sons, Robert Beck and wife Cheryl of Greencastle, IN, Gary Beck and wife Kathy of Minden and John Beck and wife Connie of Minden; granddaughters, Melanie Beck of Kearney and Erika (Beck) Muthart and husband, Ian of Lincoln, NE; step-grandchildren, Shane Funk and wife Rebecka of Spearfish, SD, Jason Funk and wife Meggin of Rushville, NE, Aaron Funk and wife Sarah of Woodstock, GA and Zachary Funk of Omaha, NE; 11 step-great-grandchildren and 2 step-great-great-grandchildren; brother-in-law, Hilly Beck and wife Nadine of Springfield, MO; sisters-in-law, Lois Beck of Ravenna, Marion Beck of Minden, and Carole Beck of Lexington; as well as a host of nieces, nephews, other relatives and friends. Betty was preceded in death by her parents; her husband, Richard; brothers, Clair, Robert and Charles; sisters, Marian, Shirley and Beverly; brothers-in-law, Archie, Donald, and Marshall Beck. Tributes of memory can be shared with the family at www.craigfunerals.com.

Betty Lou (Berger) Beck, 90, of Kearney, formerly of Minden, passed away on Saturday, March 30, 2019 at Mt. Carmel Home in Kearney. Funeral services will be held at 10:00 a.m. on Friday, April 5, 2019 at the First Christian Church in Minden... View Obituary & Service Information

The family of Betty L. Beck created this Life Tributes page to make it easy to share your memories.

Send flowers to the Beck family.