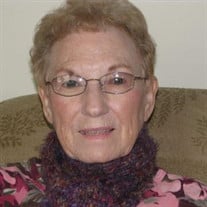 Betty J. Grisham, 81, of Minden died Friday, July 15, 2016, at home. Private graveside services will be Wednesday at Shelton Cemetery with Pastor Tom Barnes officiating. Visitation will be Tuesday, July 19, 2016, from 5-7 pm at Layton-Craig Funeral Home in Minden. She was born August 5, 1934, to William J. and Georgia A. (Mefferd) Bontz in Center, Missouri. On July 30, 1954, she married Albert L. Grisham, Jr. in Hannibal, Missouri. They made their home in Hannibal until 1959. In 1959, they moved to southern California. In 1969 they moved to Cedarville, Ohio. While in Cedarville, she was head of the Cedarville University post office. In 1982, they returned to southern California where she was head of the telephone communications for Vanguard University. In 1988 they moved to Shelton, Nebraska to be closer to family. In 2000, they moved to Minden, Nebraska. She enjoyed sewing comfort items for cancer patients in Kearney and Grand Island as well as numerous humanitarian causes. She also enjoyed traveling with her husband in their RV. Survivors include her husband, Al, of Minden; son, Mark Grisham of Kettering, Ohio; daughter, Cindy Ingram of Kearney, NE; granddaughter, Jessica Ingram of Kearney, NE; brother, David Bontz of Minden, NE; 2 great grandchildren and numerous nieces and nephews. She was preceded in death by her parents, 2 sisters and 3 brothers.

The family of Betty J. Grisham created this Life Tributes page to make it easy to share your memories.

Send flowers to the Grisham family.