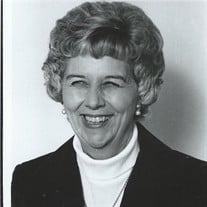 Betty Morey, 95 years of age from Minden, Nebraska passed away on Tuesday, June 14, 2016 at the Kearney County Health Services-Hospital in Minden. Funeral services will be on Tuesday, June 21, 2016 at 10:30 a.m. at the United Methodist Church in Minden with Rev. Paul Blanchard officiating. Burial will be in the Minden Cemetery. Visitation will be at the Layton-Craig Funeral Home in Minden on Monday from 3-5 p.m. Betty was born on May 17, 1921 in Franklin, Nebraska to Benjamin and Grace (Long) Harrington. She grew up in Franklin and graduated from Franklin High School. Betty received her teaching certificate and then taught in a country school. On August 29, 1940 she married Clayton Morey. They lived in Bertrand, Curtis and then made their home in Minden. Betty was a member of the United Methodist Church in Minden, and P.E.O. and had held many offices within the club. She had been active with the Minden Chamber of Commerce and the Minden Garden Club. Betty was a very talented artist. She was very proud to have graduated from Kearney State College at the age of 50. Betty touched the lives of many with her ability to always stay positive wherever she went. Her great smile and kind heart lifted many souls. She was a rock to her family, always listening to their needs whether in joy or sorrow or just a needed shoulder to lean on. She loved her family and took great joy in her grandchildren and great grandchildren. She will be greatly missed… Survivors include two sons, James Morey and wife, Trudi of Encino, CA and Ben Morey and wife, Linda of Minden; five grandchildren, Jason Morey and wife, Carolina of Encino, CA, Jenna Peck and husband, Steve, of Genoa, Nevada, Kristin Collins and husband, Bobby, of Encino, CA, Matt Morey and wife, Erica of Kearney, NE and Mark Morey of Kearney, NE; and 12 great grandchildren. She is preceded in death by her husband, Clayton, two brothers and two sisters. The Kearney County Foundation specifically designated to the Minden Christmas Pageant Fund.

Betty Morey, 95 years of age from Minden, Nebraska passed away on Tuesday, June 14, 2016 at the Kearney County Health Services-Hospital in Minden. Funeral services will be on Tuesday, June 21, 2016 at 10:30 a.m. at the United Methodist Church... View Obituary & Service Information

The family of Betty Morey created this Life Tributes page to make it easy to share your memories.

Betty Morey, 95 years of age from Minden, Nebraska passed away...

Send flowers to the Morey family.