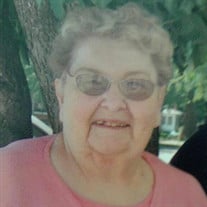 Beverlee Joy (Olsen) Miller, 82, of Minden, Nebraska died October 18, 2018 at Bethany Home in Minden. Memorial services will be held at 10:30 a.m. on Saturday, November 3, 2018 at the Westminster United Presbyterian Church in Minden with the Reverend Daniel Davis officiating. Private family inurnment will be held prior to services at the Minden Cemetery. There will be no visitation as the family is honoring her wish to be cremated. Memorials in Bev’s honor are suggested to the family for later designation. Craig Funeral Home is in charge of the arrangements. Bev was born on March 9, 1936 in Hildreth, Nebraska to Rienhart and Grace (Jorgensen) Olsen. She grew up in Minden and received her education at Minden High School. She later attended beauty school in Hastings, Nebraska. She worked as a beautician in Minden, and later owned a children’s clothing store. She spent 34 years working at East Elementary school as a teacher’s aide. She took great pride in her adorable bulletin boards and window displays. She retired in 2004 due to health issues. Bev was united in marriage to Jim Graham on June 29, 1956. They had 12 wonderful years together before Jim passed in 1968. She married Al Miller on November 26, 1975. She was a devoted wife, who lovingly cared for him during his battle with cancer, until the time of his death in 1997. Bev enjoyed getting to know Al’s family and loved them dearly. She was a member of Westminster United Presbyterian Church and the Legion Auxiliary. Most of Bev’s life was spent bringing joy and sweet treats to those around her. Although she endured much suffering in this life, she handled it all with grace and faith. She will be remembered for her loving acts of kindness, her sense of humor, her courage, and her unfailing faith! Left to cherish her memory are her sisters and their spouses, Donna Schwenka of Minden, Marcia and Dean Marsh of San Diego, CA, Janice and John Horan of Nebraska City, and Cindy Flavell of Ennis, MT, as well as a host of nieces, nephews, other relatives and friends. She was preceded in death by her parents; husbands, Jim and Al; sister, Deb Cover and infant brother, Marshall Olsen. Tributes of memory can be shared with the family at www.craigfunerals.com.

The family of Beverlee J. Miller created this Life Tributes page to make it easy to share your memories.

Send flowers to the Miller family.