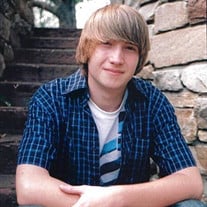 Blake A. Maxon, 24, of Minden, passed away on Wednesday, December 25, 2019 in Minden. A celebration of life open house will be held from 2:00 to 4:00 p.m. on Monday, December 30, 2019 at the Craig Funeral Home in Minden. There will be no visitation as the family has honored Blake’s wish to be cremated. Private family inurnment will be held at a later date. In Lieu of flowers, memorials in Blake’s honor are kindly suggested to the family for later designation. Craig Funeral Home is in charge of the arrangements. Blake Alan Maxon was born on June 10, 1995 in Minden, to Scott A. and Julie K. (Consbruck) Maxon. He grew up in the Minden area and graduated from Minden High School with the class of 2013. Blake worked various jobs in the area but really enjoyed his work as a professional painter. His hobbies included bowling, fishing, spending time with friends, playing video games, listening to music and anything having to do with drawing or artwork. Those left to cherish his memory include his mother, Julie Walker and companion Kirby Wendelin of Martell, Nebraska; father, Scott Maxon and wife Delaine of Minden; brother, Brandon Maxon of Tacoma, Washington; paternal grandmother, Eleanor Maxon of Minden; aunts and uncles, Kelly (Lon) Mills of Minden, Howard (Colleen) Maxon of Minden, Deb (Mark) Roskilly of Omaha, Cindy Consbruck of Lincoln, Pamela Consbruck of Florida, Brian (Tammy) Consbruck of Juniata, and Brent (Liza) Consbruck of Alaska; as well as a host of cousins and close friends. Blake was preceded in death by his paternal grandfather, Adrian “Snowy” Maxon, and his maternal grandparents, Leo and Alice Consbruck. Tributes of memory can be shared with the family at www.craigfunerals.com.

The family of Blake A. Maxon created this Life Tributes page to make it easy to share your memories.

Blake A. Maxon, 24, of Minden, passed away on Wednesday, December...

Send flowers to the Maxon family.