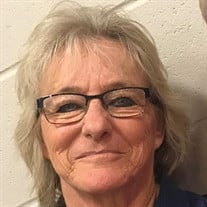 Brenda Kay (Keiser) Hemje received her wings and was called home on September 29, 2018 at the age of 63. Funeral services will be held at 11:00 a.m. on Thursday, October 4, 2018 at Trinity Lutheran Church in Hildreth with the Rev. Marcia Dorn and Rev. Matt Snell officiating. Interment will be held following services at the Emmanuel Lutheran Cemetery south of Hildreth. Visitation will be held from 4:00 to 6:00 p.m. on Wednesday, October 3, 2018 at the Craig Funeral Home – Jelden Chapel in Hildreth. Memorials in Brenda’s honor are kindly suggested to the family for later designation. Craig Funeral Home is in charge of the arrangements. Brenda was born to Halsey and Phyllis (Harms) Keiser on February 23, 1955. She was baptized and confirmed at St. Peter’s Lutheran Church in Hildreth. On January 5, 1974, she married Steven Paul Hemje. Their marriage was blessed with 3 children; Kari, Jill and Casey. Though her roles were many in life, her greatest roles were those of devoted daughter, mom and grandma. Brenda loved hard and grieved deep. Her life was full of struggles but the faith and strength she learned from her mom and grandmother got her through. She was an empathetic friend and thought of others often with her random acts of kindness. “Granny Pooh” was the name she was called by her grandchildren Jaci, Rylee, William and Danelle. She always had their best interests at heart teaching them to stay humble, be kind and do good unto others. She is survived by her daughter, Kari and husband Troy Legg of Kenesaw; 4 grandchildren, Jaci, Rylee, William and Danelle; 4 dogs that kept her company in her darkest days; mother-in-law, Florence Quadhamer and husband Arnold; sister, Cindy Courtney, as well as other siblings, and many friends. Brenda was preceded in death by her husband Steve, her daughter Jill (age 6) and her son Casey (age 28); her parents and 2 brothers Ric and Dan. Tributes of memory can be shared with the family at www.craigfunerals.com.

Brenda Kay (Keiser) Hemje received her wings and was called home on September 29, 2018 at the age of 63. Funeral services will be held at 11:00 a.m. on Thursday, October 4, 2018 at Trinity Lutheran Church in Hildreth with the Rev. Marcia... View Obituary & Service Information

The family of Brenda K. Hemje created this Life Tributes page to make it easy to share your memories.

Send flowers to the Hemje family.