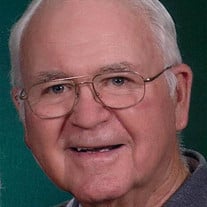 Buckley “Buck” A. Christensen, 80, of Minden, passed away on Tuesday, March 20, 2018 at Kearney County Health Services - Countryside Living in Minden. Celebration of life services will be held at 10:30 a.m. on Friday, March 23, 2018 at St. John’s Catholic Church in Minden with Msgr. Paul Witt officiating. Private family interment will be held prior to the service at the Minden Cemetery. Visitation will be held from 4:00 to 6:00 p.m. on Thursday, March 22, 2018 at Craig Funeral Home in Minden. He was surrounded by his family as he went to be with his Lord. Buck was born on March 6, 1938, in Minden to Arlo and Alberta (Maxon) Christensen. He lived his entire life in Minden and attended the First Christian Church. He played football and graduated from Minden High School in 1956. He married Sharen Joyce of Heartwell on June 13, 1959 in Minden. As a teenager, Buck worked at Maxon Motors detailing cars and trucks. After graduation, he was a mechanic at the Ford Garage in Minden. In 1961, he went to work for Southern Nebraska Public Power as a lineman until the end of 1999. He continued as a meter reader until the end of 2008. He was a founding member and the first President of the Minden Optimist Club. His hobbies included tinkering in the garage, showing his 1932 Plymouth Coupe, organizing large tubing trips down the Platte, and helping plan his class reunions. Most importantly, he truly enjoyed making sure his children, grandchildren and all other children he met were having a great time. Buck enjoyed visiting with friends and never met a stranger. Buck is survived by his wife of 59 years, daughter Kristie and husband Michael Mosher of Greeley, CO, son Michael of Sioux Falls, South Dakota, grandchildren Jamison and wife Beth of Kearney, Tanner and wife Christi of Webster, SD, Levi and wife Kira of Sibley, Iowa, Mariah of Eagle Point, OR, and AnnaLee of Sioux Falls, SD, five great-grandchildren, his sister Dixie and husband Tim Beck of Minden, sister-in-law Milrae and husband Harold Korb of Hastings, and many nieces and nephews across the country. He is preceded in death by his parents, brother Bruce, and son Matthew. Memorials are suggested to the family for later designation. Craig Funeral Home is in charge of the arrangements.

The family of Buckley "Buck" A. Christensen created this Life Tributes page to make it easy to share your memories.