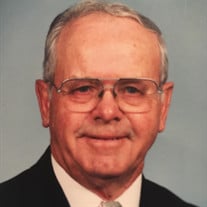 Carl Richard Swanson, 95, of Minden, passed away on Sunday, June 9, 2019 at Bethany Home in Minden. Memorial services will be held at 11:00 a.m. on Tuesday, June, 25, 2019 at the Westminster United Presbyterian Church in Minden with the Rev. Sharon Rees officiating. Private family inurnment will be held prior to services at the Minden Cemetery. There will be no visitation as the family has honored Carl’s wish to be cremated. Memorials in Carl’s honor are kindly suggested to the Westminster United Presbyterian Church, Bethany Home, or to AseraCare Hospice. Craig Funeral Home is in charge of the arrangements. Carl was born on October 22, 1923 in Comstock, Nebraska to Charley August and Martha Marie (Anderson) Swanson. He graduated from Dry Valley High School with the class of 1942. The family lived on a farm near Weissert, Nebraska. Carl’s father passed away when he was 18 years old. Carl then stayed to help his mother raise his three sisters and one brother; he also took over the family farm operation. On November 28, 1946, he was united in marriage to Shirley M. Shultz in Broken Bow. Shirley and Carl were blessed with two daughters: Linda and Connie. They lived on the family farm near Weissert for five years before they moved to North Platte for a year. They later moved to Minden in 1958, where Carl co-owned the Minden Grain Company in Minden and Norman for many years. During retirement, the couple spent 34 years enjoying winters at South Padre Island, Texas. Carl was a member of the Westminster United Presbyterian Church in Minden and attended the Chapel by the Sea in South Padre Island. He loved surf fishing, trips into Mexico, family vacations, and he deeply loved his family. Carl had a great sense of humor, which many people enjoyed while he resided at Bethany Home. Those left to cherish his memory include his daughter, Linda Nelson and husband Lynn of Minden and their children, Scott (Teresa) Nelson, and Lisa (Dan) Hope; daughter, Connie Ryan and husband Terry of rural Gibbon and their children, Brad (Jennifer) Zwink, and Bobbie Jo (Spencer) Strong; great-grandchildren, Ashley (Dalton) Vettel, Emily and Haley Nelson, Logan, Gavin and Brielle Hope, Rya and Corinn Zwink, and Sutton and Hallie Jo Strong; great-great-grandchildren, Benjamin and Cooper Vettel; sisters, Helen Marie Pirnie and Alice Pirnie; brother, Loran Swanson and wife Janet; sister-in-law, Patricia Shultz; as well as a host of nieces, nephews, other relatives and friends. He was preceded in death by his parents; his wife; two sisters, Evelyn James and Clara Drake; brothers-in-law, Charles Drake, Don Pirnie, John Pirnie, Robert Delosh, and Richard Shultz. Tributes of memory can be shared with the family at www.craigfunerals.com.

Carl Richard Swanson, 95, of Minden, passed away on Sunday, June 9, 2019 at Bethany Home in Minden. Memorial services will be held at 11:00 a.m. on Tuesday, June, 25, 2019 at the Westminster United Presbyterian Church in Minden with the... View Obituary & Service Information

The family of Carl R. Swanson created this Life Tributes page to make it easy to share your memories.

Carl Richard Swanson, 95, of Minden, passed away on Sunday, June...

Send flowers to the Swanson family.