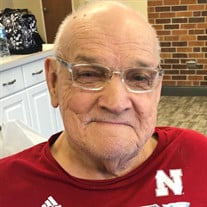 Carl “Tuffy” E. Hunt, 80, of Minden passed away on Tuesday, December 8, 2020 at Bethany Home in Minden. Funeral services will be held at 2:00 p.m. on Tuesday, December 15, 2020 at the Keene Evangelical Free Church with the Rev. Matt Snell officiating. Visitation will be held from 4:00 to 7:00 p.m. on Monday, December 14, 2020 at the church. The service will be streamed to the funeral home’s Facebook page. The current health recommendations will be followed and the use of a face mask is required. Cremation will take place following services and private family inurnment will be held at a later date in Merna, NE. Memorials in Tuffy’s honor are kindly suggested to the family for later designation. Craig Funeral Home in Minden is in charge of the arrangements. Carl was born on March 8, 1940 in Ainsworth, NE to Leon and Clara (Bruce) Hunt. He grew up and attended school in Merna. He later served with the Nebraska National Guard Unit out of Broken Bow. He was united in marriage to Patricia Bond on August 22, 1965 in Broken Bow and to this union, two girls were born: Sherie and Loretta. The family made their home in Kearney where Tuffy was employed by Kearney Crete and Block. Tuffy also drove semi for several years across the United States with Delicious Foods, T.F.S. (Tri-Farm Service), Rawhide, and Friend Freightways until his retirement at the age of 70. He was known on the roadways through his CB handle: “Hey Road King”. Tuffy enjoyed country western music – especially Johnny Cash. He loved watching Westerns, bull riding, NASCAR, football, and especially Husker Football. He played poker with family and even took to the sport of snowmobiling. Other hobbies included watching trains – real trains and even the occasional model train. He was an avid bowler in his younger years. He really enjoyed family gatherings and loved being with family. Those left to cherish his memory include his former wife, Patricia Hunt of Axtell; daughters, Sherie (Jay) Hixon of Wilber, and Loretta (Mike) Morgan of Axtell; grandchildren, Bruce Carpenter, Halie Morgan, Cassandra Hixon, and Ethan Morgan; great-granddaughter, Aliena Osterbuhr, brothers, Roy Hunt of Grand Island, Gerald Hunt of Grand Island, Roger (JoAnn) Hunt of St. George, UT; sisters, Iris Sisson of Ainsworth, Janice Swearingen of Kearney, Georgia (Tom) Kleeb of Sargent, Kathy (Marvin) Christy of Minden, NV as well as a host of extended relatives and close friends. He was preceded in death by his parents and granddaughter, Jaylynn Hixon. Tributes and memories can be shared with the family at www.craigfunerals.com.

The family of Carl "Tuffy" E. Hunt created this Life Tributes page to make it easy to share your memories.

Send flowers to the Hunt family.