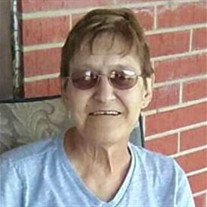 Carrol Sue Clapp, 65, of Kearney, formerly of Culbertson, NE, passed away peacefully on Sunday, July 14, 2019 with family by her side at CHI Health - Good Samaritan Hospital in Kearney, NE. Her family would like to invite friends and family to join them for a celebration of her life and dinner on August 3, 2019 at 6:30 PM at the McCook Christian Church in McCook, NE. Private family inurnment will be held at a later date. In lieu of flowers, memorials in Carrol’s honor are kindly suggested to the family for later designation and can be sent to the Carrol S. Clapp Memorial at 1929 31 RD, Upland, NE 68981. Craig Funeral Home is in charge of the arrangements. Carrol was born on June 30, 1954 in Cambridge, NE to Joe and Iona (Schaffert) Goddard. She received her GED and attended McCook Community College. On October 8, 1971 she married Terry Duane Clapp in Arapahoe, NE. To this union seven children were born. Carrol spent most of her life as a homemaker and later spent a number of years employed at Hillcrest Nursing Home until her health no longer allowed her to do so. She enjoyed spending time with her friends and her family, and loved watching her grandchildren and great grandchildren grow. She was preceded in death by her parents, her husband; two sons, Caleb and Gabe; daughter, Flossie; one sister, her in-laws, a brother-in-law and sister-in-law. She is survived by three daughters, Becky (Duke) Ebert of Culbertson, NE; Charity (Adam) Carfield of McCook, NE; Jessie (Josh) Johnson of Upland, NE; son, Josh (Miranda) Clapp of Hildreth, NE; two brothers, Roy Goddard of Salida, CO and Hank Goddard of Wilcox, NE; brother-in-law, Tim Clapp; 11 grandchildren, Crystal Dack, Courtney Cruse, Brent Carfield, Dakota Blagg, Lacy Terwilliger, Nikita Johnson, Nate Clapp, Carlee Carfield, Andrew Carfield, Mason Johnson and Grayson Johnson; 13 great-grandchildren; as well as numerous nieces, nephews, other relatives, and a host of friends. Tributes of memory can be shared with the family at www.craigfunerals.com.

Carrol Sue Clapp, 65, of Kearney, formerly of Culbertson, NE, passed away peacefully on Sunday, July 14, 2019 with family by her side at CHI Health - Good Samaritan Hospital in Kearney, NE. Her family would like to invite friends and family... View Obituary & Service Information

The family of Carrol S. Clapp created this Life Tributes page to make it easy to share your memories.

Send flowers to the Clapp family.