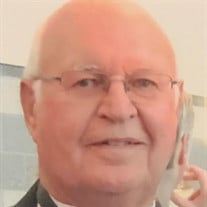 Charles K. Tomsen, 83, of Minden, NE passed away on Thursday, January 4, 2018 at his home. Memorial services will be held at 11:00 a.m. on Monday, January 8, 2018 at Bethany Lutheran Church in Minden with the Rev. Donald Hunzeker officiating. Burial will be held prior to services at the Minden Cemetery. The family has honored Chuck’s wishes to be cremated. There will be a memorial book signing with the family present from 3:00 to 5:00 p.m. on Sunday, January 7, 2018 at the Craig Funeral Home in Minden. Craig Funeral Home of Minden is in charge of the arrangements. Chuck was born on October 5, 1934 in Minden, to Nels and Luella (Meyer) Tomsen. He attended country school until the third grade and then went to Minden Public Schools, graduating from Minden High School in 1952. During his high school career, he was All-State in Football and Co-Captain of the 1952 State Champion Basketball team. He then attended the University of Nebraska at Lincoln, studying Agriculture. While in college, he was a member of the Delta-Tau-Delta fraternity; where he made many life-long friends. He also was in the Air Force ROTC in college and after graduation from UNL in 1956; he served as a navigator in the Air Force until 1959. On May 27, 1956 he was united in marriage to Nancy Draper in Belden, NE. The couple spent the first three years moving with the Air Force and then settled in Ralston and Omaha from 1959 until 1964 where Chuck worked for the Farmer’s National Company. In 1964 he returned to Minden and began feeding cattle and farming, an occupation he loved into his last years. He was an active member of Bethany Lutheran Church and the Kearney County Cattlemen. He was elected to the Kearney County Board of Supervisors and also served as a director of the local Co-Op and the Tri-Basin N.R.D. Two of his favorite past times were following Husker football (as a season ticket holder since 1962) and following Whippet Athletics. Survivors include his wife, Nancy; daughter, Molly and husband Steve Anderson; son, Andy and his wife Jana (Jensen) Tomsen, all of Minden; grandchildren, Caitlyn (Anderson) Hawthorne and husband Zach of New York City, NY, Max Anderson of Lincoln, NE, Nicholas Tomsen and wife Michaela of Wichita, KS, Jessica (Tomsen) Shoff and husband Dustin of Minden, NE, Sarah (Tomsen) Rasmussen and husband Adam of Papillion, NE; four great-grandchildren, Moriah, Charlie and Daniel Tomsen and Lena Rasmussen; brothers, Willis “Tiny” Tomsen and wife Barbara of Tulsa, OK and James Tomsen of Upland, NE; sister, Betty Kempf and husband Fred of Kearney, NE as well as a host of nieces, nephews, other relatives and friends. Chuck was preceded in death by his parents and older brother Donald, who died during childhood. Memorials are suggested to the Bethany Lutheran Church or to the Kearney County Community Foundation.

Charles K. Tomsen, 83, of Minden, NE passed away on Thursday, January 4, 2018 at his home. Memorial services will be held at 11:00 a.m. on Monday, January 8, 2018 at Bethany Lutheran Church in Minden with the Rev. Donald Hunzeker officiating.... View Obituary & Service Information

The family of Charles "Chuck" K Tomsen created this Life Tributes page to make it easy to share your memories.

Send flowers to the Tomsen family.