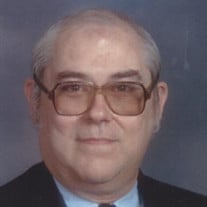 Charles Anthony Einspahr, 69 years of age from Minden, NE died on Monday, October 3, 2016 at Kearney County Health Services-Hospital in Minden. Funeral services will be on Thursday, October 6, 2016 at 11:00 a.m. at the St. Paul Lutheran Church in Minden with Rev. Christopher Hazzard officiating. Burial will be in the Minden Cemetery. Visitation will be at the Layton-Craig Funeral Home in Minden on Wednesday from 4-6 p.m. Charles was born May 31, 1947 to Carl and Ruby (Knight) Einspahr in Minden, Nebraska. He was baptized into Lutheran faith at Wanda Lutheran Church in Holstein, NE. He was a member of the St. Paul Lutheran Church in Minden. Charles graduated from Minden High School in 1965. After graduation he worked at several different industries in the Kearney and Hastings areas. He lived in Hastings until he moved back to Minden in 2014. He loved watching NASCAR and Kansas City Royals on TV. He enjoyed going to his nephew’s ball games before he got ill. In May 2003 he was diagnosed with follicular lymphoma. In 2005 his cancer reoccurred and then he was cancer free for 10 years. In July of 2015 he was diagnosed with glioblastoma of the brain. Survivors include his sisters, Althea (Charles) Shepard of Kenesaw and Marie (Terry) Nelson of Minden; nephews: Fred (Marcy) Podewitz of Ozark, MO, John (Ramoni) Podewitz of Woodstock, GA, Matthew (Lacy) Fredrickson of Heartwell, David (Jasmine) Wengler of Riverton, Shawn Wengler of Riverton; nieces, Diana Podewitz of Heartwell, Michelle Hart of Hayes Center, NE, Megan (Webb) Antholz of Minden, and many great nieces and nephews and great-great nieces and nephews. He is preceded in death by his parents, brother David, sister Loreata Podewitz and great nephew Harley Antholz. Memorials may be given to St. Paul Lutheran Church, American Cancer Society, or Kearney County Health Services.

The family of Charles A. Einsphar created this Life Tributes page to make it easy to share your memories.

Send flowers to the Einsphar family.