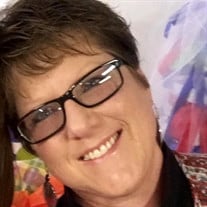 Christine A. Wells, 52, of Axtell died on Sunday, September 24, 2017 at her home in Axtell. Celebration of Life Services will be held 3:00 p.m. on Friday, September 29, 2017 at Trinity Lutheran Church in Axtell with the Rev. Gale Dorn officiating. Private family Inurnment will be held at Pleasant Hill Cemetery in Axtell. Memorial book signing, with family present, will be held from 5:00 to 6:45 p.m. on Thursday, September 28, 2017 at Trinity Lutheran Church in Axtell. Craig Funeral Home in Minden is in charge of the arrangements. Christine Ann (Pettijohn) Wells was born in Minden, NE on October 1, 1964 to Don and Vernelle Pettijohn. Christine spent her whole life in Axtell and graduated from Axtell High School in 1983. She then attended Hastings College and Kearney State College. She married Kurt R. Wells of Axtell on October 1, 1988 and they were blessed with three children: Kelsey, Conner and Kit. Christine was very active throughout High School participating in Band, Choir, Pep Club, Youth Group and Athletics. Something she always took great pride in was being part of the 1982 State Volleyball Championship team. That year she was named First Team Class D All-State Athlete as well as First Team All-Class. She also enjoyed various ski trips, family visits to their cabin along the Loup River and time spent with friends. Christine was employed at CPI in Axtell for the past 18 years. She was very well respected by everyone she worked with and enjoyed all of her co-workers and customers. Her children were the light of her life and she enjoyed watching them in sports, music and all of their activities. She never wanted to miss anything, and always had to be at least an hour early to all of their events. Christine had a great passion for reading, loved her flower garden and always looked forward to an evening drive with Kurt in order for her to take pictures, mostly of the sunset. She enjoyed so many wonderful things that life had to offer and her contagious laugh, sense of humor and love for all things will be greatly missed by all of her family and friends. Christine is survived by her husband, Kurt; children, Kelsey Sisneros and husband David, Conner Wells and Kit Wells; grandson’s, Kellen Anderson and Bryson Sisneros; parents, Don and Vernelle Pettijohn; sister, Tracie Pettijohn; mother-in-law, Carol Wells; sisters-in-law, Angela Sommers and Camille McDonald and husband Joe; brother-in-law, Lyle Wells and wife Laurie as well as a host of nieces, nephews, other relatives and friends. She was preceded in death by her grandparents, Mr. and Mrs. LaVerne Jacobsen and Mr. and Mrs. William Pettijohn; father-in-law, Roger Wells and brothers-in-law, Jeff Wells and Hoyle Sommers. A memorial has been established in Christine’s memory and is suggested to the family for later designation.

Christine A. Wells, 52, of Axtell died on Sunday, September 24, 2017 at her home in Axtell. Celebration of Life Services will be held 3:00 p.m. on Friday, September 29, 2017 at Trinity Lutheran Church in Axtell with the Rev. Gale Dorn officiating.... View Obituary & Service Information

The family of Christine A. Wells created this Life Tributes page to make it easy to share your memories.

Send flowers to the Wells family.