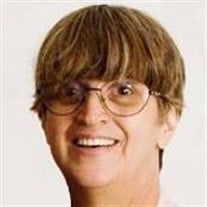 Cindy L. (Burritt) Lantis, 55, of Upland died March 2, 2019 at her home. A Mass of Christian Burial will be held at 10:30 a.m. on Thursday, March 7, 2019 at St. John’s Catholic Church in Minden with the Rev. Julius Tvrdy officiating. Interment will be held at 1:30 p.m. on Thursday, March 7, 2019 at the Upland Cemetery. Visitation will be held from 4:00 to 6:00 p.m. on Wednesday, March 6, 2019 at Craig Funeral Home in Minden with Rosary services at 7:30 p.m. at St. John’s Catholic Church in Minden. Memorials in Cindy’s honor are kindly suggested to the family for later designation. Craig Funeral Home is in charge of the arrangements. Cindy was born on April 15, 1963 in Minden, NE to Richard and Sandra Burritt. She grew up in Minden, Alma, and Upland and received her education at Minden Public Schools. She was united in marriage to Larry Lantis on February 19, 1984 in Minden, NE, after which the couple lived in Upland, NE. Cindy was employed at Eaton Corporation in Kearney, NE. She was also a member of the Upland Volunteer Fire Department. Survivors include her husband, Larry of Upland; daughter, Rachelle (Chris) Blocher of Kearney; sons, Steven (Abigail) Lantis of Lincoln; Tyler Lantis of Minden; grandchildren, Leo and Adalyn Blocher of Kearney and Jaxon, Ryker, and Linley of Lincoln; mother, Sandra Burritt of Upland; brother, Richard D. Burritt and special friend Carol Homick of Raleigh NC; sisters, Kris (James) Gillespie of Minden, Della Burritt and special friend Richard Johnson of Minden, Susan (Troy) Unzicker of Alliance; as well as a host of other relatives and friends. She was preceded in death by her father, Richard Burritt. Tributes of memory can be shared with the family at www.craigfunerals.com.

The family of Cindy L. Lantis created this Life Tributes page to make it easy to share your memories.

Send flowers to the Lantis family.