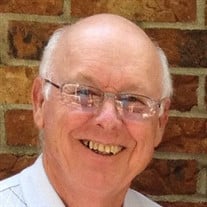 Clark Victor Norblade (72) of Axtell, Nebraska passed away Sunday, March 5, 2017 at the Good Samaritan Hospital in Kearney. Funeral services will be on Wednesday, March 8, 2017 at 2:00 p.m. at the Trinity Lutheran Church in Axtell, NE with Pastor Gale Dorn officiating. Burial Will be in the Pleasant Hill Cemetery in Axtell. Visitation will be at the Layton-Craig Funeral Home in Minden today from 4-6 p.m. Clark was born on August 24, 1944 to Paul & Merinda (Holmquist) Norblade. He graduated from Axtell Community School in 1962. He attended Nebraska State Teachers College in Kearney (UNK) where he played football for four years. Clark was the first recipient of the Tom French award given to the outstanding freshman football player and participated in the post season game against Prairie View A&M in 1963. Clark taught history and physical education and coached in Farnam , Overton and at Kearney High School. On December 27, 1968 he married Diane Johnsen of Wilcox, Nebraska. In 1971, he retired from teaching to return to farming south of Axtell. In addition to farming, Clark served on the boards of: Funk Telephone Company, Axtell/Midland Coop, Axtell School, Axtell Fire Department and Trinity Lutheran Church, serving as president of several of those boards. Clark enjoyed a variety of sports including golf, bowling, hunting and softball. He played in a fast pitch softball league until he was over 50 years of age. He participated on a team in the Masters Softball tournament, and played games in Lincoln, Omaha, St. Joseph, Missouri and Bismark, North Dakota. He enjoyed meeting people and didn’t know a stranger, even though he often mentioned that it had embarrassed him as a youngster when his father did the same thing. He could be found sitting in the mall visiting with others while his wife and daughters shopped. Clark is survived by his wife, Diane, daughters, Nicole of Lincoln, Mindy (MJ) and husband, Matthew Marx of Gretna, and Sara and husband Lucas Deibler of Axtell, four grandchildren, Oliver and June Deibler and Alexander and William Marx, two brothers, Paul and wife, Judy of Kearney and Terry and wife Brenda of Axtell and one sister, Rochelle and husband, Wayne Wendell of Fort Morgan, Colorado, mother in-law, Juanita Woollen of Holdrege, one brother in-law, Larry Johnsen of Alma, one sister in-law, Cheryl and husband Gary Gittelson of Oceanside, California, step brothers, Ron Woollen and wife, Sue of Wilcox and Jerry Woollen of Lincoln, several nieces and nephews. He was preceded in death by his parents, brother in-law, Randy Johnsen, sister in-law Sherri Flood.

Clark Victor Norblade (72) of Axtell, Nebraska passed away Sunday, March 5, 2017 at the Good Samaritan Hospital in Kearney. Funeral services will be on Wednesday, March 8, 2017 at 2:00 p.m. at the Trinity Lutheran Church in Axtell, NE with... View Obituary & Service Information

The family of Clark Victor Norblade created this Life Tributes page to make it easy to share your memories.

Send flowers to the Norblade family.