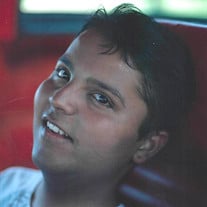 D.J. “Speed” Wendell, 24, of Keene, passed away on Thursday, April 19, 2018 at his home following a courageous battle with Muscular Dystrophy. Celebration of Life services will be held at 10:30 a.m. on Monday, April, 23, 2018 at Trinity Lutheran Church in Hildreth with the Revs. Steve and Patti Byrne officiating. Interment will follow services in the Keene Cemetery. Visitation will be held from 3:00 to 5:00 p.m. on Sunday, April 22, 2018 at the Craig Funeral Home in Minden. DJ was born on February 16, 1994 in Puna, India. At a young age, he was lovingly adopted into the Wendell family. He was baptized on February 20, 2000 and confirmed on April 5, 2009 at Trinity Lutheran Church in Hildreth. Speed grew up in the Keene area and attended Wilcox-Hildreth Public Schools where he graduated with the class of 2013. He later attended Central Community College in Hastings where he earned his certificate in Computer Aided Drafting and Design. Speed’s favorite hobbies included playing video games, especially his PlayStation, watching NASCAR and cheering for his favorite driver, Mark Martin. A special pastime of his was reading his Bible and sharing scripture with friends and family. He had an unfailing faith which gave him the most positive outlook on life. DJ also enjoying spending time with his family and friends, especially his classmates. Regardless of the occasion, he truly enjoyed hosting the best parties and gatherings imaginable. Those left to cherish his memory include his father, Todd and step-mother Rhona Wendell of Keene; mother, Lorie Cline of Campbell; siblings, Lacey Beckmann and husband Alex of Minden, Dannielle Carlson and special friend Dustin Franklin of Overland Park, KS; nieces and nephews, Jacob Wendell of Minden, Anika, Arial and Talon Beckmann all of Minden and Bennet Franklin of Overland Park, KS; grandmothers, Ruth Cline of Franklin and Mary Wendell of Axtell, as well as a host of aunts, uncles, other relatives and friends. He was preceded in death by his grandfathers, Jack Cline and Milford Wendell; sisters, Amanda Wendell and Brooke Wendell; and one cousin, Marshall Cline. Memorials are suggested to the Muscular Dystrophy Association in Omaha for research at 14344 Y Street #100, Omaha, NE 68137. Tributes of memory can be shared with the family at craigfunerals.com Craig Funeral Home is in charge of the arrangements.

The family of D.J. "Speed" Wendell created this Life Tributes page to make it easy to share your memories.