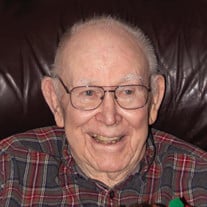 Dale E. Bunger, 86, of Holdrege, formerly of Minden, passed away on Sunday, August 22, 2021 at Christian Homes Care Community in Holdrege. A celebration of life will be held at 11:00 a.m. on Thursday, August 26, 2021 at Trinity Lutheran Church in Hildreth with Rev. Caroline Keenan officiating. The service will be live streamed to the church’s Facebook and YouTube pages. Private family interment will be held prior to services at Hildreth Cemetery. There will be no visitation. Memorials in Dale’s honor are kindly suggested to the family for later designation. Craig Funeral Home is in charge of arrangements. Dale Ede Bunger was born on October 17, 1934 to Harry H. and Minnie (Pollmann) Bunger at their rural Kearney County home, northeast of Hildreth. He was baptized November 2, 1934 at St. Peter’s Lutheran Church in Hildreth, and confirmed his faith at that same church in 1949. He attended the rural school one and a half miles north of his home and completed his education at Hildreth Public School, graduating in 1952. Dale enlisted in the Nebraska Air National Guard based in Lincoln in December 1952. He attended service school in Amarillo, TX from November 1955 to April 1956. He reached the rank of staff sergeant in 1957. Dale was honorably discharged in 1960 and was a member of the Air Force Reserve from 1960 to 1961. On September 21, 1955 Dale married Jean M. Ejlersen at Smith Center, KS. They lived on a farm southwest of Minden until moving to Minden in 1958. They had two children, Christy and Steven. Jean passed away in May of 1999. From 1958 to 1997 Dale worked for the Nebraska Department of Roads at the Minden location. He began as an equipment operator and retired after 39 years as the head of the Minden State Shop. Dale married Celestine Kral on August 17, 2002 in Campbell, NE. The couple made their home in Minden. Those left to cherish his memory include: his wife, Celestine Kral of Minden; son, Steven (Jean) Bunger of Hildreth; daughters, Christy (Donald) Kosmicki of Holdrege, Mary Kral of Hastings, Pat Grams of Minden, Pam (Terry) Chalupa of Hastings, Jan (Ron) Luikens of Scottsbluff, Deb Larson, Joni Kral, Barb (John) Sullivan and Chip (Andy) Ellingson, all of Lincoln; many grandchildren and great-grandchildren; as well as a host of nieces, nephews, extended relatives and friends. He was preceded in death by his wife, Jean; parents; daughter, Charlynn (Kral) Krcilek; brother, Harry F. Bunger; and sisters, Marie (Don) Fries and Helen (Gerald) Lienemann.

Dale E. Bunger, 86, of Holdrege, formerly of Minden, passed away on Sunday, August 22, 2021 at Christian Homes Care Community in Holdrege. A celebration of life will be held at 11:00 a.m. on Thursday, August 26, 2021 at Trinity Lutheran... View Obituary & Service Information

The family of Dale E. Bunger created this Life Tributes page to make it easy to share your memories.

Dale E. Bunger, 86, of Holdrege, formerly of Minden, passed away...

Send flowers to the Bunger family.