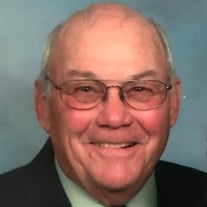 Darrell L. Fishell, 80, of Axtell, passed away on Wednesday, February 20, 2019 at his home in Axtell. Funeral services will be held at 11:00 a.m. on Monday, February 25, 2019 at Trinity Lutheran Church in Axtell with the Rev. Gale Dorn officiating. Private family interment will be held at a later date at Pleasant Hill Cemetery in Axtell. Visitation will be held from 3:00 to 5:00 p.m. on Sunday, February 24, 2019 at the Craig Funeral Home in Minden. In Lieu of flowers, memorials in Darrell’s honor are kindly suggested to Trinity Lutheran Church in Axtell or to the Axtell Volunteer Fire Department. Craig Funeral Home is in charge of the arrangements. Darrell Lee Fishell was born on August 25, 1938 in North Platte, Nebraska to Leo and Edna (Strolberg) Fishell. He lived in North Platte until age five, then moved with family to the family farm near Axtell. Darrell attended school at the Axtell Community School where he graduated with the class of 1956. He honorably served his country with the United States Army from April 4, 1957 to February 1, 1959 and from October 15, 1961 to August 16, 1962. On October 4, 1963, he was united in marriage to Vonda L. Stuhmer in Axtell, and to this union, two children were born: Kristi Lynn and Kevin Lee. The family made their home in Axtell where Darrell lived his life doing what he loved best, farming. Darrell was a member of the Trinity Lutheran Church in Axtell. He was also a member of the Kearney Elks and Kearney American Legion Post #52. He enjoyed camping, fishing, boating, traveling, having coffee with friends and attending his children’s and grandchildren’s activities. Those left to cherish his memory include his wife, Vonda of Axtell; son, Kevin and wife Kari Beth Fishell of Axtell; daughter, Kristi Fisher of Thornton, CO; grandchildren, Brandt and Blake Fisher, August, Austin and Camille Fishell, Bobbie and husband Daine Rahmann, Jackie Johnson; great-grandchildren, Rush, Hattie, and Winnie Rahmann; as well as a host of extended relatives and friends. He was preceded in death by his parents; father and mother-in-law, Henry and Ann Stuhmer; brother-in-law, Jack Crooks and nephew, Mark Crooks. Tributes of memory can be shared with the family at www.craigfunerals.com.

Darrell L. Fishell, 80, of Axtell, passed away on Wednesday, February 20, 2019 at his home in Axtell. Funeral services will be held at 11:00 a.m. on Monday, February 25, 2019 at Trinity Lutheran Church in Axtell with the Rev. Gale Dorn... View Obituary & Service Information

The family of Darrell L. Fishell created this Life Tributes page to make it easy to share your memories.

Send flowers to the Fishell family.