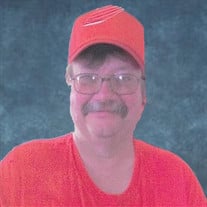 David L. Sinsel, 65, of Minden, passed away on Monday, June 28, 2021 at his home surrounded by family. Funeral services will be held at 10:30 a.m. on Friday, July 2, 2021 at Westminster United Presbyterian Church in Minden with the Rev. Sharon Rees officiating. Interment will be held following services at the Minden Cemetery. Visitation will be held from 4:00 to 6:00 p.m. on Thursday, July 1, 2021 at Craig Funeral Home in Minden. Memorials in David’s honor are kindly suggested to the family for later designation. Craig Funeral Home in Minden is in charge of the arrangements. David was born on March 29, 1956 in Minden to Leo and Harriet (Christensen) Sinsel. He grew up in the Minden area and graduated from Minden High School with the class of 1975. He continued his education at Hastings Community College where he earned a degree in horticulture. In 1985, he was united in marriage to Laurie Johansen in Minden. Dave was blessed to have four children in his life: Bradley, Mitchell, Brittany, and Katlyn. The family made their home in Minden. The couple later divorced. Dave owned and operated Minden Grain Lawn Service for many years before retiring in 2011. He was a member of the Westminster United Presbyterian Church, and the N.R.A. Dave enjoyed fishing, music, attending rock-n-roll concerts, Husker football, and spending time with family. He also had a love of classic cars. He once built a Blazer from the ground up and also restored several muscle cars. Those left to cherish his memory include his children, Bradley (Deidre) White of Eustis, Mitchell White of Minden, Brittany Sinsel (Luke Morrow) of Scotia, and Katlyn (Lance) Morrow of Scotia; 14 grandchildren; brothers, Robert Sinsel (Karen Olmstead), and Randy (Joy) Sinsel, all of Minden; as well as a host of extended relatives and many friends. He was preceded in death by his parents, Leo and Harriet Sinsel. Tributes and memories can be shared with the family at www.craigfunerals.com.

David L. Sinsel, 65, of Minden, passed away on Monday, June 28, 2021 at his home surrounded by family. Funeral services will be held at 10:30 a.m. on Friday, July 2, 2021 at Westminster United Presbyterian Church in Minden with the Rev.... View Obituary & Service Information

The family of David L. Sinsel created this Life Tributes page to make it easy to share your memories.

Send flowers to the Sinsel family.