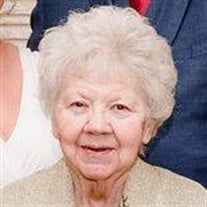 Delores M. Cavanaugh, 84, of Minden, passed away peacefully at her home on Saturday, November 17, 2018. A Mass of Christian Burial will be held on Saturday, November 24, 2018 at 11:00 a.m. at St. John’s Catholic Church in Minden with the Rev. Julius Tvrdy officiating. Interment will be held following services at the Minden Cemetery. Visitation will be held from 4:00 to 6:00 p.m. on Friday, November 23, 2018 at the Craig Funeral Home in Minden with a Rosary to follow at 7:30 p.m. at St. John’s Catholic Church in Minden. Memorials in Delores’ honor are kindly suggested to AseraCare Hospice of Kearney, The Minden American Legion Auxiliary or to the Minden Senior Center. Craig Funeral Home is in charge of the arrangements. Delores “Dee” (Exstrom) Cavanaugh was born the youngest of 14 children on May 5, 1934 to Walter and Martha (Almquist) Exstrom in Keene, NE. She was baptized on August 13th, 1934 at Bethany Lutheran Church in rural Axtell. Her mother died suddenly a few years after Dee was born, and in 1940 when her dad was unable to care for the youngest five children in the family, they were placed in the Christian Children’s Home, an orphanage in Holdrege, NE on August 17, 1940. A month later, Dee’s father passed away, and she and her siblings were truly orphans. Dee was six years old when she became an orphan and would spend the next 12 years at the orphanage. She graduated from Holdrege High School in 1952. She then attended Kearney State College where she met her future husband. Dee was united in marriage to Lawrence (Larry) Cavanaugh on June 18, 1955 at Saint John’s Catholic Church in Minden. They made their home on the family farm where Dee was a homemaker. They were blessed with five children, Michael, Mark, Matthew, Debra, and David. After Larry was killed while crop-dusting in 1970, Dee moved from the farm into town and continued to raise her children there. She was an active member of St. John’s Catholic Church where she served in many capacities. She was also a member of the American Legion Auxiliary Post #94. She thoroughly enjoyed volunteering in the community assisting with meals-on-wheels, bloodmobiles and May Day basket deliveries. When she wasn’t caring for her family or volunteering, she was more than likely earning her title as a Life Master in bridge. Dee may have been one of Nebraska’s greatest bridge players. More than anything, Dee loved spending time with her family and friends and supporting them in any way she could. She is survived by her five children; Mike (Janet) of Minden, Mark of Altus, OK, Matt of Minden, Debbie (Dan) of Minden, and David (Donna) of Minden. Grandchildren include; Aaron Cavanaugh, Mandy Richards (Les), Larry Cavanaugh, Melissa Fagen (Evan), Justin Cavanaugh, Luke Cavanaugh (Allison), Drew Cavanaugh, Clare Cavanaugh, Andrew Dorn, and Emilee Hoffschneider (Jacob). Her great-grandchildren include Connor, Addison and Gunnar Fagen, Jackson Richards and Dallas Hoffschneider. She is also survived by brothers John “Gus” Exstrom of Minden and Arthur “Bud” (Elaine) Exstrom of Lincoln, NE and sister-in-laws, Laverne Exstrom of Richfield, MN, Ruthie Exstrom of Elyria, OH and Donna Exstrom of Denver, CO; as well as a host of cousins, nieces, and nephews and close friends. Dee is preceded in death by her husband, Larry, an infant daughter, her parents and her siblings, Walter “Gene” Exstrom, Jerome Exstrom, Wilma Matson, Lloyd Exstrom, Warren Exstrom, Maynard Exstrom, Martha “Norma” Hammer, Kenneth “Kenny” Exstrom, Dwight “Chick” Exstrom, Dwayne Exstrom, and Robert “Squeak” Exstrom. Tributes of memory can be shared with the family at www.craigfunerals.com.

The family of Delores M. Cavanaugh created this Life Tributes page to make it easy to share your memories.

Delores M. Cavanaugh, 84, of Minden, passed away peacefully at...