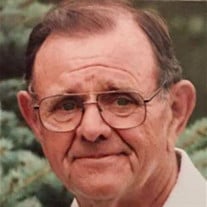 Delwyn’s Obituary Delwyn Arthur Boldt, 80 years of age, passed away on July 28th, 2017, surrounded by his family.  Delwyn was born one of six boys on September 12th, 1936 to August Robert Ludwig Boldt and Ella Leona Villnow Boldt, in Norfolk, Nebraska.  He was baptized and confirmed at St. John’s Lutheran Church in Stanton.  He was raised on the family farm and attended school in Stanton and graduated from Stanton High School in 1954.  He joined the United States Army and was an active duty service member for four years, including tours in Germany and Italy before being honorably discharged in 1959.  He returned home to Stanton and worked with his father on the farm.  That year, he met Patricia Ann Doran and they were married April 23rd 1960.  To this union were born five children; Renee Ann, Douglas Joseph, Terrance Daniel, Janelle Diane, and Cheryl Marie.  The family lived in Bloomfield, NE prior to moving to the Minden area in 1963, and Del worked at the Minden Terminal before working for several farmers in the area.  Del and Pat moved to Upland permanently in 1973 and raised their family.   He was an active member of the Upland Volunteer Fire Department, serving as a firefighter and EMT for many years.  He loved spending time with his family, watching his grandchildren grow and attending their activities, traveling, restoring John Deere tractors, farming, and working in his shop.   He was strong in his faith and was a member of St. John Catholic Church in Minden and St. Anne Catholic Church in Campbell. Del is survived by his children, Renee and husband Craig Grams of Upland, their children Benjamin, Nicholas, Christopher and fiancé Brielle, and Elizabeth; Douglas and wife Jamie of Upland, their children Alyssa and husband Russell Walton and son Carter, Amanda, and Ashton; Terry and wife Lori of Bolivia, NC, their children Jackson, Lucas, Elizabeth, and Patrick; Janelle and husband Dean Moburg, of Leavenworth, KS and children Jason, Andy, Samantha, Zachary, and McKenzie; Cheryl and husband Rhett Richardson, of Barnwell, SC, their children Boldt and Rebecca; brothers LaVaughn Boldt, Robert Boldt and wife Karen all of Norfolk, NE; sisters-in-law Brenda Boldt of Norfolk, Georgia Koenig and husband Bill of Yankton, SD, Mary Timblin and husband Virgil of Bee, NE, Sandy Sullivan of Burlington, Washington; brothers-in-law Larry Harsin of Minden, NE, Tom Doran and wife Donna of California; many nieces and nephews, great nieces and nephews, cousins, and many friends He is preceded in death by his loving wife, his parents, three brothers Donald, Lewis, and Marlen, brother-in-law Jack Sullivan, sister-in-law Arlyce Boldt, and nephew Tommy Sullivan. Visitation will be Sunday, August 6th from 4-7 pm at St. Anne Catholic Church in Campbell, NE with Rosary to follow.  Funeral services will be August 7th at 11 am in Minden at St. John Catholic Church with lunch to follow and graveside services at the Upland Cemetery at 2:30 pm.  Layton Craig Funeral Home is in charge of the arrangements.  Memorials may be sent to the Upland Volunteer Fire Department.

The family of Delwyn Arthur Boldt created this Life Tributes page to make it easy to share your memories.

Send flowers to the Boldt family.