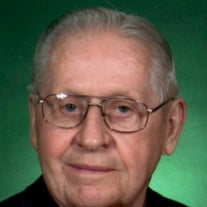 Dennis Thomas Osterbuhr, 91, of Minden, passed away on Thursday, May 4, 2017 at his home in Minden following an extended illness. Funeral Services will be held on Monday, May 8, 2017 at 10:30 a.m. at St. John’s Catholic Church in Minden with Father James Benton officiating. Interment will be in the Minden Cemetery with Military Rites provided by the Minden American Legion and Heartwell VFW. A luncheon will follow interment at the church. Visitation will be held from 3:00 p.m. to 5:00 p.m. on Sunday, May 7, 2017 at Craig Funeral Home in Minden, with the family receiving friends at that time. A Rosary will be said, after the visitation, at 7:00 p.m. at St. John’s Catholic Church. Craig Funeral Home of Minden is in charge of arrangements. Dennis was born on March 24, 1926 to Thomas E. and Clara E. (Larraway) Osterbuhr at their farmhouse in rural Hildreth, Nebraska. He attended grade school in Hildreth, Franklin, rural Kearney County, and Minden. “Denny” was a sociable young man who loved reading, accounting, gardening, and following Nebraska sports. He was a starting guard on the undefeated Minden High School football team with his class of 1944. Upon graduation, in May of 1944, he entered the Army Air Corps and served during the Second World War. His AAC unit was poised to go to the Pacific but at the last minute, he was sent to the European theater. Denny was united in marriage to Catherine Ann Filbin on September 17, 1951 at the Holy Family Catholic Church in Heartwell, Nebraska. The couple lived in Minden where Denny was employed at his father’s business, Tom’s Barber Shop. Within five years, he owned and operated the business as Denny’s Barber Shop. Two major cancer surgeries interfered with Denny’s health and he retired from barbering in 1981. After retirement, he repaired sewing machines as a hobby. He also clerked auctions for Elger Grams for several years. Denny had continuous sciatic nerve pain for the last 28 years of his life. Despite his suffering, family, friends, and complete strangers were treated to his unique sense of humor and funny stories. Many would have tears, sore cheeks or ribs, after spending time with Denny because his remarks were so hilarious. Denny served on the board of the Minden Housing Agency for 34 years, and served as chairman of the MHA for many years. He also was on the Minden Parks and Recreation Committee, the City of Minden Zoning Board and chaired several Kearney County blood drives for the American Red Cross. He was a member of St. John’s Catholic Church; American Legion Post 94 of Minden and the VFW (Veterans of Foreign Wars). After the declassification of the Atomic Secret Act in 1996, Denny became a member of the National Association of Atomic Veterans. He is survived by his wife, Catherine; sons, Michael (Monica) Osterbuhr of Hildreth, NE; Thomas (Chris) Osterbuhr of Bellevue, NE; grandchildren, Katelyn Osterbuhr (fiancé, Mark Wilee) of New Orleans, LA; Denise O. (Jay) Morris of New Orleans, LA; Jason (Christine) Osterbuhr of Omaha, NE; Alyson Osterbuhr of Lincoln, NE; Brandon Osterbuhr of Bellevue, NE; Meghan Osterbuhr, and great-granddaughter, Luna Rose Osterbuhr of Omaha, NE. Denny was preceded in death by his parents and by his son, James Dennis Osterbuhr. Memorials are suggested to American Legion Post 94, AseraCare Hospice, or St. John’s Catholic Church.

The family of Dennis Thomas Osterbuhr created this Life Tributes page to make it easy to share your memories.

Dennis Thomas Osterbuhr, 91, of Minden, passed away on Thursday,...