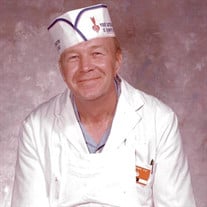 Dick Eugene Hoskins, 84, of Minden, Nebraska died on Wednesday, December 18, 2019 at Kearney County Health Services in Minden. Funeral services will be held on Friday, December 27, 2019 at 11:00 a.m. at the First Christian Church in Minden. Visitation will be held on Thursday, December 26, 2019 from 5:00 to 7:00 p.m. at the Craig Funeral Home in Minden with the family present. Burial will be held following services at the Minden Cemetery. Memorials in Dick’s honor are kindly suggested to the St. Jude Children’s Hospital. Craig Funeral Home is in charge of the arrangements. Dick was born to Loren H. and Avis T. Hoskins on February 1, 1935 in Guide Rock, Nebraska. There he attended and graduated school. He met Geraldine Ricker of Holstein, Nebraska and they were married on November 7, 1954. They recently celebrated their 65th wedding anniversary. They had three children: Anita Jean (Kevin Manion) both losing their lives at age 26 in a house fire, Richard Lee (Ayla) of Florida and Steven Eugene (Julia Anderson) of the Minden area. Dick was a meat cutter by trade and learned at the Safeway store in Superior. In 1960, the family moved to Minden and Dick managed the meat department at the “new” Mason’s Market. He also owned and operated Dick’s Locker and Processing Plant in Minden. Later, he managed the meat department at Jack and Jill in Minden. After retirement, Dick enjoyed refinishing and selling antiques. He loved the outdoors, his dog Peanut, fishing, picnicking with friends, but his pride and joy was his wife, kids and grandchildren. He always considered himself lucky to have the family he did. Dick had one grandson, Dicky and seven granddaughters, Brittany, Samantha, Matty, Cydney, Laura, Lisa, and Linda. He had several great-grandchildren. Dick had six siblings that he was close to throughout his life; Barbara Bright (deceased), Ted Hoskins of Oregon, Carol Whittington of Oregon, Mary Ellen Schneider of Oregon, Donald Hoskins of Florida, and Vikki White of Kansas. Tributes of memory can be shared with the family at www.craigfunerals.com.

The family of Dick E. Hoskins created this Life Tributes page to make it easy to share your memories.

Send flowers to the Hoskins family.