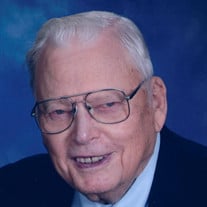 Obituary of Donald Marinus Kristensen Donald Marinus Kristensen, 94 years of age from Minden, NE was born on October 22, 1922, in Minden, Nebraska. He died on Wednesday, September 13, 2017, at Kearney County Health Systems in Minden at the age of 94. He was the son of Arthur Marinus Kristensen and Magdalena (Lena) Dora Marie Mestmacher. He grew up in the Cosmo township area, attending Grum country school and graduated from Minden High School in 1942. He married Mary Lucinda (Mary Lou) Martin on November 22, 1953 at Sacred Heart Catholic Church in Kenesaw. Shortly after marriage, they began to farm on their own north of Minden. Don loved all aspects of agriculture. Don’s passion was raising corn and feeding cattle. He particularly enjoyed repairing everything. Don would spend hours in the shop taking things apart and fixing them. In 1962, Don and Mary Lou moved to their “home-place” two and a quarter miles north of Minden on highway 10. They expanded the farming operation. Don sold Archer Oil for most of his life, meeting hundreds of farmers over the years. He and Mary Lou farmed until June of 2016 when they moved to Bethany Home in Minden. They had two sons, Douglas Allan Kristensen, and Duane Martin Kristensen. Don was proud of both sons for gaining their college degrees and pleased they chose to raise their families in the Minden area. Grandchildren and daughters-in-law brought a special smile to Don’s face. Don was active in the community by serving on the Farmer’s Coop board, the Kearney County Museum board and the Federal Land Bank board of directors. He was honored to be the chairman of the board for Federal Land Bank. Don and Mary Lou enjoyed traveling; frequently with Don’s brother, Eugene and wife, Mary Jean. They went to Europe, China and many places in the United States. Don’s hobbies always included farm sales, visiting with the neighbors, driving around checking on the progress of area crops and falling asleep in the chair watching “old-west” movies. His favorite hobby was collecting and restoring Allis-Chalmers tractors. Don and Mary Lou loved to go to dances, especially at the Elks in Kearney. They enjoyed attending birthday and anniversary celebrations for their many friends. They did everything together. Don is survived by his sons, Douglas Kristensen and wife Terri S. Harder, of Minden; son Duane Kristensen and wife Deborah (Stones) of Minden; grandchildren Morgan Kristensen, Paige Kristensen, Katerina White and husband Zane, Daniel Kristensen, Jenna Kristensen and great-granddaughter Scarlett White; sister-in-law Esther Colburn and husband Larry; brother-law John Martin; and a number of nieces and nephews. He was preceded in death by his wife, who died June 11, 2017, his parents, and brother Eugene and wife Mary Jean. Funeral service will be on Minden, September 18, 2017 at 10:30 a.m. at the St. John’s Catholic Church in Minden with Father James Benton officiating. Visitation will be on Sunday from 1:30 until 3:30 p.m. at the Craig Funeral Home in Minden. Rosary will be recited at 5:00 p.m. at the church. Burial will be in the Minden Cemetery. Memorials are suggested to UNK Arboretum Fund at the University of Nebraska Foundation, the Kearney County Museum and St. John’s Catholic Church, Minden, NE.

The family of Donald Marinus Kristensen created this Life Tributes page to make it easy to share your memories.

Send flowers to the Kristensen family.