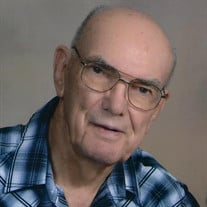 Donald Earl Lammers, 93, of Minden, passed from this life on Tuesday, April 13, 2021, at Bethany Home in Minden. Funeral services will be held at 10:00 a.m. on Saturday, April 17, 2021 at St. Paul Lutheran Church in Minden with Rev. Duane Duley and Rev. Donald Becker officiating. The service will be streamed to the church’s YouTube channel. Interment will be held following the service at the Minden Cemetery with military honors presented by the Minden American Legion and the Heartwell Veterans of Foreign Wars. Visitation will be held from 4:00 to 6:00 p.m. on Friday, April 16, 2021 at Craig Funeral Home in Minden. Memorials in Don’s honor are kindly suggested to Lutheran Hour Ministries, St. Paul Lutheran Church in Minden, or Bethany Home in Minden. Craig Funeral Home in Minden is in charge of the arrangements. Don was born on February 18, 1928, in Upland, Nebraska in a loving Christian home to Christian and Dorothea (Klahn) Lammers. His faith was evident throughout his life. He grew up in Upland, Nebraska and graduated from Upland High School in 1945. He was united in marriage to JoAnn Kile on January 16, 1949, in Upland, Nebraska. They were able to celebrate their 70th wedding anniversary in 2019. They were blessed with two daughters, three granddaughters and one great-grandson. Don enlisted in the United States Navy in 1946 at the age of 18. He came from a military family having two brothers in the Navy and one brother in the Army when he enlisted. He went through basic training in San Diego and was deployed to serve in Tsingtao, China, with the Navy Seabees. He was trained as a motor machinist and worked security to guard the airport and do maintenance on military vehicles. Don was honorably discharged from the United States Navy in 1948. He was baptized and confirmed in the Lutheran faith and was an active member of St. Paul Lutheran Church, Minden. He served on various boards and committees through the years. Don farmed; was a Minden city mail carrier for 25 years; then worked as a crop adjuster until retiring at the age of 82 to take care of JoAnn at home after she suffered a stroke in 2010. Don enjoyed doing carpentry work and made furniture pieces for members of his family, he loved doing gardening and flowers, jigsaw puzzles, sports (especially the Cubs and the Huskers), and watching old western movies. Above all he loved spending time with his family. Left to cherish his memory are his daughters, Connie (Robert) Griffin of Lincoln; Paula Burgess of Minden; granddaughters, Crystal Burgess (Tom Ervin) of Lincoln; Chantal Griffin of Lincoln; Rochelle Griffin (Andrew Millette) of Lincoln; great-grandson, Henry Millette of Lincoln; brothers-in-law, Wayne (Willene) Kile of Minden; Darryl (Kay) Kile of Lincoln; sister-in-law, Joanne Lammers of Arapahoe; sister-in-law Roma Anderson of Minden, as well as many nieces, nephews and extended family. He was preceded in death by his wife, JoAnn; his parents; brothers, Carl, Jacob, Alfred, Roy, Ralph, Willis and William, and sisters Lena, Bertha, Anna, Clara and Julietta; and son-in-law, Larry Burgess. Tributes and memories can be shared with the family at www.craigfunerals.com.

Donald Earl Lammers, 93, of Minden, passed from this life on Tuesday, April 13, 2021, at Bethany Home in Minden. Funeral services will be held at 10:00 a.m. on Saturday, April 17, 2021 at St. Paul Lutheran Church in Minden with Rev. Duane... View Obituary & Service Information

The family of Donald E. Lammers created this Life Tributes page to make it easy to share your memories.

Donald Earl Lammers, 93, of Minden, passed from this life on...

Send flowers to the Lammers family.