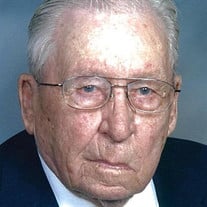 Donald N. Thoesen, 96, of Minden, passed away on Sunday, December 10, 2017 at Kearney County Health Services Countryside Living in Minden. Funeral services will be held at 11:00 a.m. on Thursday, December 14, 2017 at St. Paul Lutheran Church in Minden with the Rev. Christopher Hazzard officiating. Private family burial will be held prior to services at the St. Paul Lutheran Cemetery in Holstein, NE. Visitation will be held from 5:00 to 7:00 p.m. on Wednesday, December 13, 2017 at the Craig Funeral Home in Minden. Craig Funeral Home is in charge of the arrangements. Donald Nels Thoesen was born in Kearney County on February 6, 1921, near Norman, NE to Nels and Dora (Thomas) Thoesen. He grew up in the Norman area where he attended school and graduated in 1938. On January 24, 1946 he married Kathryn Hansen of Holstein at St. Paul’s Lutheran Church. He farmed and raised cattle on their farm west of Holstein. Don later retired from farming in 1984. After retiring, he built and operated Sugar Loaf Antiques. While continuing to have an interest in the farm, he spent many hours building and refinishing furniture. Don and Kathryn enjoyed traveling to auctions and estate sales to find new additions to the antique business. In 1994 they moved to Minden. Don was preceded in death by his parents and his wife Kathryn, who passed away on July 4, 1999. Survivors include his children and spouses: Don and wife Marjorie (Shafer) Thoesen of Louisville, NE, Judy and husband Jim Jacobs of Hastings, NE, Robert Thoesen of Holdrege, NE; grandchildren, Jeffrey and Amy Jacobs of Washington, Il, Michele Tripp of Gretna, NE, Amy and Chuck Scanlon of Rapid City, SD, Michael and Kellie Anne Thoesen of Lynnwood, WA; great-grandchildren, Kara Jacobs, Jadyn Jacobs, Eden Thoesen, Laiken Thoesen, Addyson Jacobs, Bryanne Tripp, Brayden Tripp, Prestyn Scanlon, Braxton Tripp and Emily Scanlon. Memorials are suggested to the St. Paul Lutheran Church in Minden.

The family of Donald N. Thoesen created this Life Tributes page to make it easy to share your memories.

Donald N. Thoesen, 96, of Minden, passed away on Sunday, December...

Send flowers to the Thoesen family.