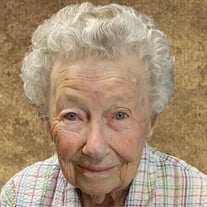 Doris V. Jorgensen, 99, of Minden, passed away on Wednesday, May 4, 2022 at CHI Health – Good Samaritan in Kearney. Funeral services will be held at 10:30 a.m. on Tuesday, May 10, 2022 at First Christian Church in Minden with the Rev. Joe Tira officiating. Interment will be held following the service at the Minden Cemetery. Visitation will be held from 4:00 to 6:00 p.m. on Monday, May 9, 2022 at Craig Funeral Home in Minden. Memorials in Doris’ honor are kindly suggested to the family for alter designation. Arrangements are under the care of Craig Funeral Home in Minden. Doris V. Jorgensen was born on July 18, 1922 in Kearney to Samuel and Louise (Nickel) Laue. She grew up in the Fort Kearny area and attended District 18 school and later Newark School. She continued her education at Kearney State College where she received her teaching certificate. Doris taught country school east of Norman for one year and then taught in Phelps County for four years prior to marriage. On May 19, 1946, she was united in marriage to Robert W. Jorgensen in Minden. The couple adopted Jerry Jorgensen when he was six months old. The family made their home in Minden where Doris was a devoted homemaker. Doris enjoyed woodworking and carpentry - there wasn’t a piece of furniture she couldn’t fix! She also enjoyed gardening and raising cats. Those left to cherish her memory include her grandson, Shane (Lora Sinsel) Jorgensen; granddaughter, Heather Jorgensen; great-grandchildren, Alicia Sinsel (Derek Walker), Paige (Tyler) Schukar; great-great-grandchildren, Blakely, Bently, and Bodie Walker, and Oakley Schukar; sister, Joyce (Rhodell) Jameson; sister-in-law, Alice Laue; as well as a host of extended family and close friends. She was preceded in death by her parents, husband Robert Jorgensen; son, Jerry Jorgensen; sisters, Evelyn (Ralph) Olson, Eleanor (Dale) Lange; brothers, Emil (Marian) Laue, and Bernard Laue; and infant brother, Leo Laue. Tributes and memories can be shared with the family at www.craigfunerals.com.

The family of Doris V. Jorgensen created this Life Tributes page to make it easy to share your memories.

Send flowers to the Jorgensen family.