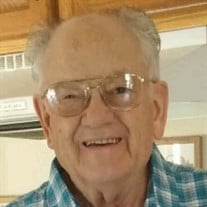 Doyle L. Corlis, 91, of Westminster, CO, passed away on Saturday, July 7, 2018 at St. Anthony North Hospital in Westminster, CO. Funeral services will be held at 2:00 p.m. on Tuesday, July 17, 2018 at the Minden United Methodist Church with the Rev. Peter Choi officiating. Interment will be held following services in the Minden Cemetery. Visitation will be held from 5:00 to 7:00 p.m. on Monday, July 16, 2018 at the Craig Funeral Home in Minden. Doyle Laroy Corlis passed away surrounded by his grateful and adoring family. Doyle was born June of 1927, on a farm near Kearney, NE., where he spent most of his childhood. He graduated from Kearney High School, and also worked at JC Penney. At 18, he joined the Navy, where he served from 1945-1946. From 1947-1949, he and his brother owned and operated a truck stop in Kearney. He married Julia Grams in 1949, they had three children. They moved to Westminster, CO in 1957. He was employed at Rocky Flats for 32 years, retiring in 1989. Doyle enjoyed traveling, yard work, and spending time with his family. He was an extraordinary man and will be greatly missed. He was preceded in death by his parents, Cecil and Eletha Corlis (Hansberry), step-father, Lyman Hansberry, and brother, Cletis Corlis. He is survived by his wife, Julia of Westminster, CO. son, Kevin Corlis of Thornton, CO., daughter, Kelli (Bobby) Moffatt of Brighton, CO., son, Bryan (Sue) Corlis of Seattle, WA; four grandchildren, Katie, Ashley, Brenna and BJ; as well as a host of other relatives and friends. Memorials are suggested to the Department of Veterans Affairs or to the Minden United Methodist Church. Tributes of memory can be shared with the family at craigfunerals.com Craig Funeral Home is in charge of the arrangements.

The family of Doyle L. Corlis created this Life Tributes page to make it easy to share your memories.

Send flowers to the Corlis family.