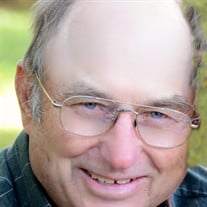 Edwin “Eddie” R. Kuehn, 73 years of age from Heartwell, NE died on August 7, 2016 at his home west of Heartwell after a fifteen month battle with a brain tumor. Funeral services will be on Friday, August 12, 2016 at 11:00 a.m. at the St. Paul Lutheran Church in Minden with Reverend Christopher Hazzard officiating. Burial will be in the Eaton Cemetery, Heartwell, Nebraska. Visitation will be at the Craig Funeral Home in Minden on Thursday from 3-5pm and 7-9pm. Eddie was born on April 1, 1943 in Hastings, NE to John A. and Lona (Dunkleberger) Kuehn. He grew up on the family farm near Heartwell. He attended Heartwell Public School through the eighth grade, graduating from Minden High School in 1960. He served in the Air National Guard. On February 23, 1969 he married Sandra Rossell in Hastings, Nebraska. Eddie and Sandy made their home west of Heartwell on the Cottonwood Creek. Eddie loved farming. Farming was never a job, it was who he was. Eddie and Sandy raised crops, livestock and four incredible daughters. Eddie found joy and beauty in every season on the farm. He especially loved fall, when he seemed to thrive on the long hours and late nights that come with harvest. The hours upon hours of time spent in the tractor or combine were never dull as the jump seat was rarely empty. Eddie loved to fix things. He was a talented welder and mechanic, an occasional carpenter and plumber, and an all the time tinkerer. One of Eddie’s favorite past times was going to farm sales where he indulged in his love of collecting. Eddie loved people from all walks of life. He knew no strangers and took a genuine interest in others. He had a great smile and fantastic gift to gab and at the same time was a good listener. He was almost never on time. Eddie was a great friend. Eddie loved his family. He never lived more than two miles away from his three brothers, and that was his heaven on Earth. He was the happiest when surrounded by the chaos that comes with a large family. He loved spending time with his nieces, nephews and cousins. He was always the last to leave a family gathering. Eddie was loved by many, but by none more so than his wife, four daughters and grandchildren. Eddie was a baptized and confirmed member of the St. Paul Lutheran Church in Minden, was a member of the Heartwell Lions Club, and was a Melvin Jones Fellow through Lions Club International. Eddie served on the Eaton Cemetery Board for many years. He was a member of the Heartwell School Board until the school closed in 1991. Memorials are suggested to St. Paul Lutheran Church or Bethany Home. He is survived by his wife, Sandy of Heartwell; four daughters, Marcia Fox (Nate) of Heartwell, Tracey Larson of Kearney, Sara Larsen (Mike) of Omaha, Rebecca Cacek (Kevin) of Lincoln; seven grandchildren, Madison Fox, Tyler and Dylan Larson, James Larsen and Braden, Spencer and Merick Cacek; his mother, Lona of Minden; his brothers, John (Jan) and Bill (Kay) of Heartwell; sister Erma (Calvin) L’Heureux of Lincoln; sister in-law, Jane Kuehn of Heartwell; and many nieces, nephews and cousins. He is preceded in death by his father, John A. Kuehn and brother, James O. Kuehn.

The family of Edwin "Eddie" Kuehn created this Life Tributes page to make it easy to share your memories.

Send flowers to the Kuehn family.