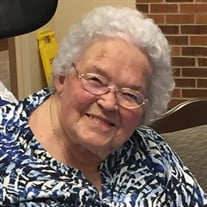 Eleanor Anne Deisley, 93, of Minden, passed away on Saturday, August 22, 2020 at Bethany Home in Minden. Memorial services will be held at 10:00 a.m. on Saturday, August 29, 2020 at Bethany Lutheran Church in Minden with the Rev. Donald Hunzeker and PMA Julie Schmidt officiating. Current recommendations for faith based services will be followed and the use of a face mask is encouraged. The service will be live streamed to the Craig Funeral Home Facebook page. Inurnment will be held following services at the Minden Cemetery. There will be no visitation as the family has honored Eleanor’s wish for cremation. Memorials in Eleanor’s honor are kindly suggested to the family for later designation. Craig Funeral Home is in charge of the arrangements. Eleanor was born on January 7, 1927 in Minden to Hubert and Anna (Bergsten) Shannon. She grew up in the Norman area and attended school at Norman and then graduated from Minden High School. She was united in marriage to Marvin R. Deisley on September 21, 1944 in Kansas and to this union, four children were born: Robert, Gerald, Geraldine & Bruce. The family made their home in the Norman and Minden area where she was employed at Bill’s Plumbing. Eleanor moved to Bethany Home where she enjoyed making new friends and the staff became family to her. Eleanor was a member of the Fredericksburg Lutheran Church, belonged to the Lions Club and Good Sam Camping Club. While being members of the camping club, Marvin and Eleanor participated in the Special Olympics torch run for several years. She loved to have fun and enjoyed being with friends and family. Her hobbies included embroidery, crochet, crafts, fishing and camping. Eleanor was famous for her homemade breads, rolls and fried chicken. Those left to cherish her memory include her daughter, Geraldine “Jeri” Danielson and husband, Terry, of Gibbon; 6 grandchildren and spouses; 12 great-grandchildren; brother, Wes Shannon and wife, Marcia, of Minden; sister, Maxine Jones of Holdrege; as well as a host of nieces, nephews, other relatives and friends. She was preceded in death by her husband, Marvin; sons, Robert “Bob” Deisley, Gerald “Jerry” Deisley, Bruce Deisley and wife, Sherry; granddaughter, Paula Deisley; parents, Hubert and Anna Shannon; sisters-in-law, Stella Andersen, Nadine Miller and Clara Reif; brothers-in-law, Steve Deisley, Louis Deisley and Jim Jones; nephew, Michael Jones; nieces, Teresa Shannon Ryan and Mary Jo Jones. Tributes and memories can be shared with the family at www.craigfunerals.com.

The family of Eleanor A. Deisley created this Life Tributes page to make it easy to share your memories.

Eleanor Anne Deisley, 93, of Minden, passed away on Saturday,...