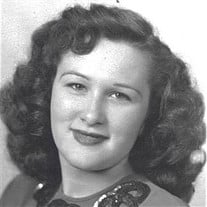 Eleanor Jeanette Jelken, 87, of rural Hildreth passed away on Tuesday, January 1, 2019 at the Franklin Care and Rehabilitation Center. Funeral services will be held at 10:30 a.m. on Saturday, January 5, 2019 at Zion Lutheran Church, west of Macon, NE, with the Revs. Baron and Nancy Cole officiating. Interment will be held following services at 1:30 p.m. at the Wilcox Cemetery. Visitation will be held from 4:00 to 6:00 p.m. on Friday, January 4, 2019 at the Craig Funeral Home – Jelden Chapel in Hildreth. Memorials in Eleanor’s honor are kindly suggested to Zion Lutheran Church in Macon. Craig Funeral Home is in charge of the arrangements. Eleanor was born on October 31, 1931 in rural Hildreth to Floralena J. Albers. She was raised by her grandparents and aunts. She attended Hildreth High School where she graduated with the class of 1949. On February 26, 1950 she was united in marriage to John D. Jelken at St. Peter’s Lutheran Church in Hildreth and to this union two children were born, Gene and Brenda. The family made their home in rural Hildreth where Eleanor cherished her role as a farm wife until her health no longer allowed her to do so. She spent the last couple of years in area care homes where the staff loved her. She was a member of St. Peter’s Lutheran Church in Hildreth until its closing, when she joined Zion Lutheran Church in Macon. Eleanor enjoyed cooking for her family and neighbors, reading, traveling with John and spending time with her family. Those left to cherish her memory include her husband of nearly 69 years, John Jelken of rural Hildreth; son, Gene Jelken of Bloomington; daughter, Brenda and husband Dennis Reiss of Wilcox; grandchildren, Michael Jelken of Hildreth, Christina and husband Steven Platt of Huntley and Sheena Dallmann and friend Adam Henke of Smith Center, KS; great-grandchildren, Heath, Jase and Avery Platt and Lily Dallmann; brother, Walter Schnoor and wife Maxine of Casa Grande, AZ; as well as a host of other relatives and friends. She was preceded in death by her parents and father and mother-in-law, Fred and Pearl Jelken. Tributes of memory can be shared with the family at www.craigfunerals.com.

The family of Eleanor J. Jelken created this Life Tributes page to make it easy to share your memories.

Eleanor Jeanette Jelken, 87, of rural Hildreth passed away on...

Send flowers to the Jelken family.