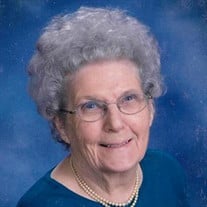 Eleanor Maxon, 91, of Minden, passed away on Friday, January 31, 2020 at her home. Memorial services will be held at 11:00 a.m. on Saturday, February 8, 2020 at the Minden United Methodist Church with the Rev. Peter Choi officiating. Private family inurnment will be held at a later date at the Minden Cemetery. There will be no visitation as the family has honored Eleanor’s wish for cremation. Memorials in Eleanor’s honor are kindly suggested to the Minden United Methodist Church or to the family for later designation. Craig Funeral Home is in charge of the arrangements. Eleanor was born on July 4, 1928 in Axtell, to Arthur R. and Anna V. (Anderson) Becander. She grew up on the family farm south of Axtell where she attended country school through the eighth grade. She later graduated from Axtell High School with the class of 1945. She was baptized and confirmed at Bethany Lutheran Church near Axtell. After graduation, she lived in Kearney and Lincoln where she worked at Montgomery Ward, Sears, and in the Capital Building. On January 11, 1953, she was united in marriage to Adrian “Snowy” M. Maxon at Bethany Lutheran Church in Axtell. This union was blessed with three children: Howard, Scott and Kelly. The family made their home in Minden where Eleanor worked several bookkeeping jobs. She later became a Bank Officer for the Minden Exchange Bank, where she continued her work for many years before retiring. Eleanor’s was a member of the United Methodist Church in Minden. Her hobbies included traveling and spending time with family and friends. She also had a passion for genealogy, which took her to Salt Lake City, Europe, and Sweden, while doing research. She also had a profound love for animals. She enjoyed taking care of and getting to know any animal she met. Those left to cherish her memory include her sons, Howard Maxon and wife Colleen of Minden, Scott Maxon and wife Delaine of Minden; daughter, Kelly Mills and husband Lon of Minden; grandchildren, John, Paul, and Luke Maxon, Brandon Maxon and special friend Becca Kmiec, Brooke Lundeen and husband Joe, and Spencer Mills and wife Breanna; great-grandchildren, Joanna and Selma Lundeen; as well as a host of extended relatives and friends. She was preceded in death by her parents; husband Adrian, in 1995; brother, Dale Becander; granddaughter, Ann Mills, and grandson, Blake Maxon. Tributes and memories can be shared with the family at www.craigfunerals.com.

Eleanor Maxon, 91, of Minden, passed away on Friday, January 31, 2020 at her home. Memorial services will be held at 11:00 a.m. on Saturday, February 8, 2020 at the Minden United Methodist Church with the Rev. Peter Choi officiating. Private... View Obituary & Service Information

The family of Eleanor Maxon created this Life Tributes page to make it easy to share your memories.

Eleanor Maxon, 91, of Minden, passed away on Friday, January...

Send flowers to the Maxon family.