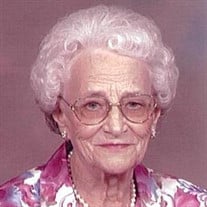 Elliene M. Christensen, 103, of Minden, passed away on Sunday, June 2, 2019 at Bethany Home in Minden. Funeral services will be held at 11:00 a.m. on Friday, June 7, 2019 at the First Christian Church in Minden with the Rev. Joe Tira officiating. Private family interment will be held prior to services at the Minden Cemetery. Visitation will be held from 4:00 to 6:00 p.m. on Thursday, June 6, 2019 at the Craig Funeral Home in Minden. Memorials in Elliene’s honor are kindly suggested to the First Christian Church or to Bethany Home in Minden. Craig Funeral Home is in charge of the arrangements. Elliene was born November 30, 1915 to Daniel E. and Martina (Larsen) Danielson on a farm in the Osco community in Kearney County, Nebraska. She attended country school District 45 in Franklin County and Upland High School, graduating in 1932. In 1927, she was baptized at the Osco Baptist Church. Her membership was later transferred to the First Christian Church in Minden, Nebraska. On June 18, 1940, she was united in marriage to Marvin W. Nelson and to this union four children were born. Marvin passed away on June 17, 1966. On November 10, 1973, she was united in marriage to Kenneth E. Christensen. Elliene was employed as a cook at the Kearney County Hospital and also in food service at Minden schools for several years. In later years, she assisted in the High School library and after retirement in 1984, she worked part time at Jensen Memorial Library. Elliene was a member of Christian Women’s Fellowship for many years, enjoyed playing Som-R-Set and camping with friends. Fried chicken, chocolate cake, cinnamon rolls, chocolate chip cookies, and apple pie are among the favorite foods she prepared and are remembered by her family. She is survived by daughter-in-law, Sharon Nelson of Holdrege; sons, Lynn (Linda) Nelson of Minden, Kendall (Pat) Nelson of Holdrege; daughter, Mary K. Carlson of Utica; eleven grandchildren, twenty-five great-grandchildren, and nine great-great grandchildren. She was preceded in death by her parents, her three siblings; husbands, Marvin W. Nelson and Kenneth E. Christensen; son, Dan A. Nelson; son-in-law, Jim Carlson, and two great-grandchildren. Tributes of memory can be shared with the family at www.craigfunerals.com.

Elliene M. Christensen, 103, of Minden, passed away on Sunday, June 2, 2019 at Bethany Home in Minden. Funeral services will be held at 11:00 a.m. on Friday, June 7, 2019 at the First Christian Church in Minden with the Rev. Joe Tira officiating.... View Obituary & Service Information

The family of Elliene M. Christensen created this Life Tributes page to make it easy to share your memories.