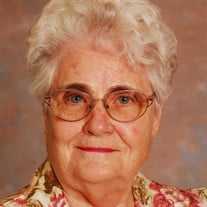 Ena N. Nokes, 91, of Minden, passed away on Sunday, April 25, 2021 at Bethany Home in Minden. Memorial services will be held at 2:30 p.m. on Tuesday, May 4, 2021 at Craig Funeral Home in Minden with Pastor Steve Shanno officiating. Private family inurnment will be held at a later date at the Danbury-Marion Cemetery in Red Willow County, Nebraska. There will be no visitation as the family has honored Ena’s wish to be cremated. Memorials in Ena’s honor are kindly suggested to the family for later designation. Craig Funeral Home in Minden is in charge of the arrangements. Ena was born on November 6, 1929 in Danbury, Nebraska to Ted and Helen (Miller) Ambler. She grew up and attended school in the Danbury and Marion area. On April 26, 1946, she was united in marriage to Harold D. Nokes and to this union, three children were born: Sharon, Leslie “Al”, and Charles. The family made their home in the McCook and Danbury area where Ena worked as a bookkeeper for many years. Ena’s work eventually took her to Lincoln where she was employed by the University of Nebraska until her retirement. After retirement, Ena moved to Minden to be closer to family. Her hobbies included hunting, fishing, gardening, sewing, cooking and spending time with her family, especially her grandchildren and great-grandchildren. She is survived by her son, Al Nokes of Minden; grandsons, Matthew Nokes of Kearney and Andrew Nokes and significant other Lindsey Leach of Kearney; granddaughters, Amy Ignowski, and Audrey Ignowski, and grandson, Adam Ignowski; great-grandchildren, Tahnna Nokes, and Ayla Nokes; as well as a host of nieces, nephews, extended relatives and friends. She was preceded in death by her parents; her husband, Harold; son, Charles, during infancy; daughter, Sharon Duncan; daughter-in-law, Rhonda Nokes; and sister, L’Marie Robertson. Tributes and memories can be shared with the family at www.craigfunerals.com.

Ena N. Nokes, 91, of Minden, passed away on Sunday, April 25, 2021 at Bethany Home in Minden. Memorial services will be held at 2:30 p.m. on Tuesday, May 4, 2021 at Craig Funeral Home in Minden with Pastor Steve Shanno officiating. Private... View Obituary & Service Information

The family of Ena N. Nokes created this Life Tributes page to make it easy to share your memories.

Send flowers to the Nokes family.