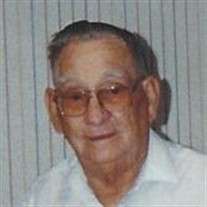 Ernest P. White, 93, Huron, SD passed away Monday, January 16, 2017 at Huron Regional Medical Center. Funeral Services for Ernie will be at 10:30 am, Monday, January 23 at the Welter Funeral Home in Huron. Visitation, with family present will be 2-4 pm, Sunday, January 22 at the Welter Funeral Home; with visitation continuing, one hour prior to the service on Monday. Graveside services will be on Tuesday, January 24, 2017 at 10:00 a.m. at the Freewater Cemetery south of Wilcox with Pastor Steve Byrne officiating. Military Rites will also be at the grave sight. Layton-Craig Funeral Home is in charge of local arrangements. Ernie was born March 16, 1923 at Minden, NE, to Robert and Fanny (Monk) White. He was raised in the Minden area, where he graduated from high school. After high school, he went to work for a brother-in-law as a welder and well driller in the Minden area, before entering the US Army on February 12, 1943 to serve during World War II in the European Theater. After his honorable discharge on December 1, 1945, he returned to the Minden area, where he met Esther “Naomi” Martin. They eloped to Belleville, Kansas and were married on May 6, 1947. They then lived in Minden, Kearney, Wolfe Point, MT, Tempe, AZ, Phoenix, AZ, where he worked on pumps and drilled wells. They then moved to Scottsbluff, NE, where he took over running a drilling company, with many contracts in the Yuma, CO area, they moved there for a time. Ernie then moved his family to Huron in 1971, where he continued his well drilling career for a short time. He then drove truck for Rich Hiles Trucking for a time, before moving into dispatching and the shop. He worked as a diesel mechanic and welder, continuing to be involved in the Hiles businesses up until last week. He was very dedicated to Hiles Farms for over 40 years, where he enjoyed and appreciated working with the Hiles Family. In Ernie’s free time, he enjoyed golfing and was a long-time member of the Scottsbluff Elks. Survivors include his daughters, Elizabeth Ann Rivas, Tacoma, WA, Kay Fassler; Huron; grandchildren, Holly Ann Price, Michael Gunner Fassler, Uriah Rivas, Nicky Lee Day, Kristopher Arthur Johnson; great-grandchildren, Meckia Naomi Fassler, Hannah Price, Jacob Isaac Sprat; great-great-grandchild, Kolten Michael Adams; sister, Jane Adele Lillihorn, Holdrege, NE. Ernie was preceded in death by his parents, wife, Naomi; son, Jim; along with many brothers and sisters. Funeral arrangements are under the care of the Welter Funeral Home in Huron. Visit www.welterfuneralhome.com

Ernest P. White, 93, Huron, SD passed away Monday, January 16, 2017 at Huron Regional Medical Center. Funeral Services for Ernie will be at 10:30 am, Monday, January 23 at the Welter Funeral Home in Huron. Visitation, with family present will... View Obituary & Service Information

The family of Ernest P. White created this Life Tributes page to make it easy to share your memories.

Send flowers to the White family.