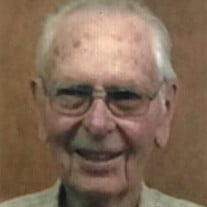 Ervin Eibe DeJonge, 93, of rural Macon, NE, passed away on Saturday, October 14, 2017 at Bethany Home in Minden. Funeral services will be held at 10:00 a.m. on Wednesday, October 18, 2017 at the Zion Lutheran Church near Macon, NE with the Revs. Baron and Nancy Cole officiating. Interment will follow services in the Zion Lutheran Church Cemetery. Visitation will be held from 4:00 to 6:00 p.m. on Tuesday, October 17, 2017 at the Craig Funeral Home – Jelden Chapel in Hildreth, NE. Craig Funeral Home is in charge of the arrangements. Ervin was born on July 14, 1924 to John and Minnie (Fruhling) DeJonge on a farm north of Macon. He was baptized August 3, 1924 and confirmed April 10, 1938 at Zion Lutheran Church was of Macon. He grew up in the Macon area and attended country school in Macon and later Franklin. On March 3, 1946 he married Gladys M. Schubert at St. John’s Lutheran Church south of Wilcox. To this union two sons and one daughter were born: Allan, Dennis, and Judy. They lived and farmed in the Hildreth-Macon area. After retirement Ervin and Gladys enjoyed many years of square dancing, traveling, and playing cards with friends. Ervin enjoyed gardening and wood working and shared these with family and friends. After the church burnt down in 1984 he made exact replicas of the cross and candle holders out of wood to place on the altar of the new church. Survivors include his sons, Allan DeJonge and his wife Dianna of Macon, Dennis DeJonge and his wife JoAnn of Kearney; daughter, Judy DeJonge; grandchildren, Marcy DeJonge, Mindy DeJonge, Melissa DeJonge and husband Mark Cox, Stasha Shields and husband Jake, and Jackie DeJonge; great-grandchildren, Morgan, Dominic, and Brooklyn; sister, Verna Jelkin and sister-in-law Glenda Schubert. He was preceded in death by his parents, his wife Gladys and sister, Irene Ubben. Memorials are suggested to the family for later designation.

Ervin Eibe DeJonge, 93, of rural Macon, NE, passed away on Saturday, October 14, 2017 at Bethany Home in Minden. Funeral services will be held at 10:00 a.m. on Wednesday, October 18, 2017 at the Zion Lutheran Church near Macon, NE with... View Obituary & Service Information

The family of Ervin E. DeJonge created this Life Tributes page to make it easy to share your memories.

Send flowers to the DeJonge family.