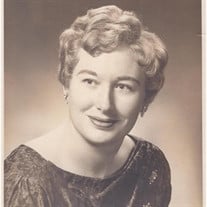 Esther May (Gass) Shannon, 81, of Kearney, passed away on Thursday, July 23, 2020 at her home. Graveside services will be held on Tuesday, July 28, 2020 at 10:00 a.m. at the Kearney Cemetery with Rev. Ken Hutson officiating. Military honors will be presented by the Kearney American Legion Post #52 and Veterans of Foreign Wars Post #759 in conjunction with the United States Navy Funeral Honors Team. Visitation will be held from 3:00 to 6:00 p.m. on Monday, July 27, 2020 at the Craig Funeral Home in Minden. Memorials in Esther’s honor are kindly suggested to her granddaughter, Lyra Mais, who was diagnosed with a brain tumor in June. It was her wish that memorials be to Lyra for her continued care. Craig Funeral Home is in charge of arrangements. Esther was born on January 8, 1939 in Kendalia, TX to Erwin and Ella (Kneupper) Gass. She grew up in the Kendalia & New Braunfels area and attended school at New Braunfels for a few years and later earned her GED. She entered the United States Navy, where she faithfully served in ship to shore communications from October 28, 1960 to October 25, 1963. She was united in marriage to Leon Howard Shannon on February 12, 1971 in Irving Township, KS, and to this union three children were born: Steve, Gail and Jill. The family made their home in Hiawatha, KS, where she was a homemaker, farmer and rancher. Esther was a member of the First United Methodist Church of Hiawatha, where she enjoyed teaching Vacation Bible School and Sunday school, especially the Book of Esther. She was an avid reader. She enjoyed sewing, gardening, embroidery, being outdoors, fishing, hunting, watching birds and other wildlife, and crossword puzzles. She enjoyed serving at the Brown County Historical Society and was a member of the American Legion. Those left to cherish her memory include: her son, Steve Shannon of Kearney; daughters, Gail (Alan) Mais of Heartwell, Jill Shannon of Garland, UT; grandchildren, Riston, Zander, Connor and Lyra Mais; brothers, Freddie (Charlotte) Gass, Jimmie (Brenda) Gass, and Ronnie (Connie) Gass. She was preceded in death by her parents and her husband. Tributes and memories can be shared with the family at www.craigfunerals.com.

Esther May (Gass) Shannon, 81, of Kearney, passed away on Thursday, July 23, 2020 at her home. Graveside services will be held on Tuesday, July 28, 2020 at 10:00 a.m. at the Kearney Cemetery with Rev. Ken Hutson officiating. Military honors... View Obituary & Service Information

The family of Esther M. (Gass) Shannon created this Life Tributes page to make it easy to share your memories.

Esther May (Gass) Shannon, 81, of Kearney, passed away on Thursday,...