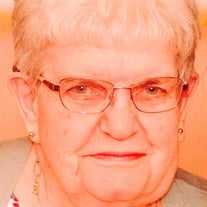 Ethel V. White, 87, of Minden, passed away on Friday, October 29, 2021 at CHI Health – St. Francis in Grand Island. Memorial services will be held at 10:30 a.m. on Friday, November 5, 2021 at Bethany Lutheran Church in Minden with Rev. Donald Hunzeker and PMA Julie Schmidt officiating. Private family interment will be held prior to services at the Minden Cemetery. Cremation was chosen. Memorials in Ethel’s honor are suggested to Minden Senior Center or to the American Heart Association. Craig Funeral Home in Minden is in charge of the arrangements. Ethel was born on April 24, 1934 in Cozad, Nebraska to Alvin I. and Ruth M. (Brown) Hyatt. She grew up and attended school in the Cozad area and graduated from Cozad High School. Ethel was united in marriage to Frank K. White on June 3, 1951 in Cozad and to this union, four children were born: Jeneane Ruth, Scott Kenneth, Alvin Robert, and Todd Alan. The family made their home in the Minden area. Ethel enjoyed driving around town and keeping up on everything that was happening. She enjoyed going to the senior center and interacting with friends there. Ethel also enjoyed playing cards, spending time with family and she had a passion for reading novels. Ethel and Frank enjoyed wintering in Arizona. Ethel continued this tradition after Franks passing in 2000. Those left to cherish her memory include her daughter, Jeneane Crawford; sons, Scott White, Alvin White, and Todd White; five grandchildren; brother, Leslie Hyatt and his wife, Evelyn; as well as a host of extended relatives and close friends. She was preceded in death by her parents; her husband, Frank; brothers, Robert, Paul, Charles; and one sister, Ruby. Tributes and memories can be shared with the family at www.craigfunerals.com.

The family of Ethel V. White created this Life Tributes page to make it easy to share your memories.

Send flowers to the White family.