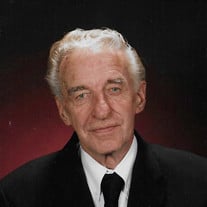 Fred Bergsten, 85 years of age from Nebraska City, NE formerly of Minden, NE died June 22, 2017 in Nebraska City. Funeral services will be on Wednesday, June 28, 2017 at 2 p.m. at the Bethany Lutheran Church in Minden with Rev. Donald Hunzeker officiating with burial in the Minden Cemetery. Visitation will be one hour prior to the funeral service at the church Layton-Craig Funeral Home in Minden is in charge of arrangements. Fred was born March 1, 1932 in Minden to Philip and Iva (Shogren) Bergsten. He was raised on a farm east of Norman, NE and graduated from Minden High School in 1949. He joined the Air National Guard in December 1950, activated to the Air Force in 1951 and was discharged December 31, 1952. On May 31, 1953 Fred married Alicia York of Brewer, Maine, at the Methodist Church in Brewer. Fred was stationed at Dow Air Force Base in Bangor, Maine. This marriage was blessed with two sons; Rick and Donald. They returned to the Norman area and farmed until 1960; then he was employed by Minden Grain until 1975. Fred opened the Husky station in Minden for a year; then sold out and started in the construction business. Fred built homes in Nebraska, Kansas, Maine and Florida. In the greater Kansas City area he worked mainly in trim and finish work. Fred and Alicia worked in Kansas City for 15 years and in 2002 moved to Nebraska City and built their new home. Alicia passed away in 2015. Fred was a past member of the American Legion, Elks, Eagles, and was a 32 Degree Mason and Shriner. He was currently a member of the First Evangelical Lutheran Church in Nebraska City. Survivors include son, Don Bergsten and his wife, Donna Jean; nine grandchildren and seven great grandchildren; sister Phyllis Gaston of Norman. He is preceded in death by his wife; son, Rick; great grandson, Kyler; brother Robert “Duane” Bergsten and sister in-law, Lela.

The family of Fred Bergsten created this Life Tributes page to make it easy to share your memories.

Send flowers to the Bergsten family.